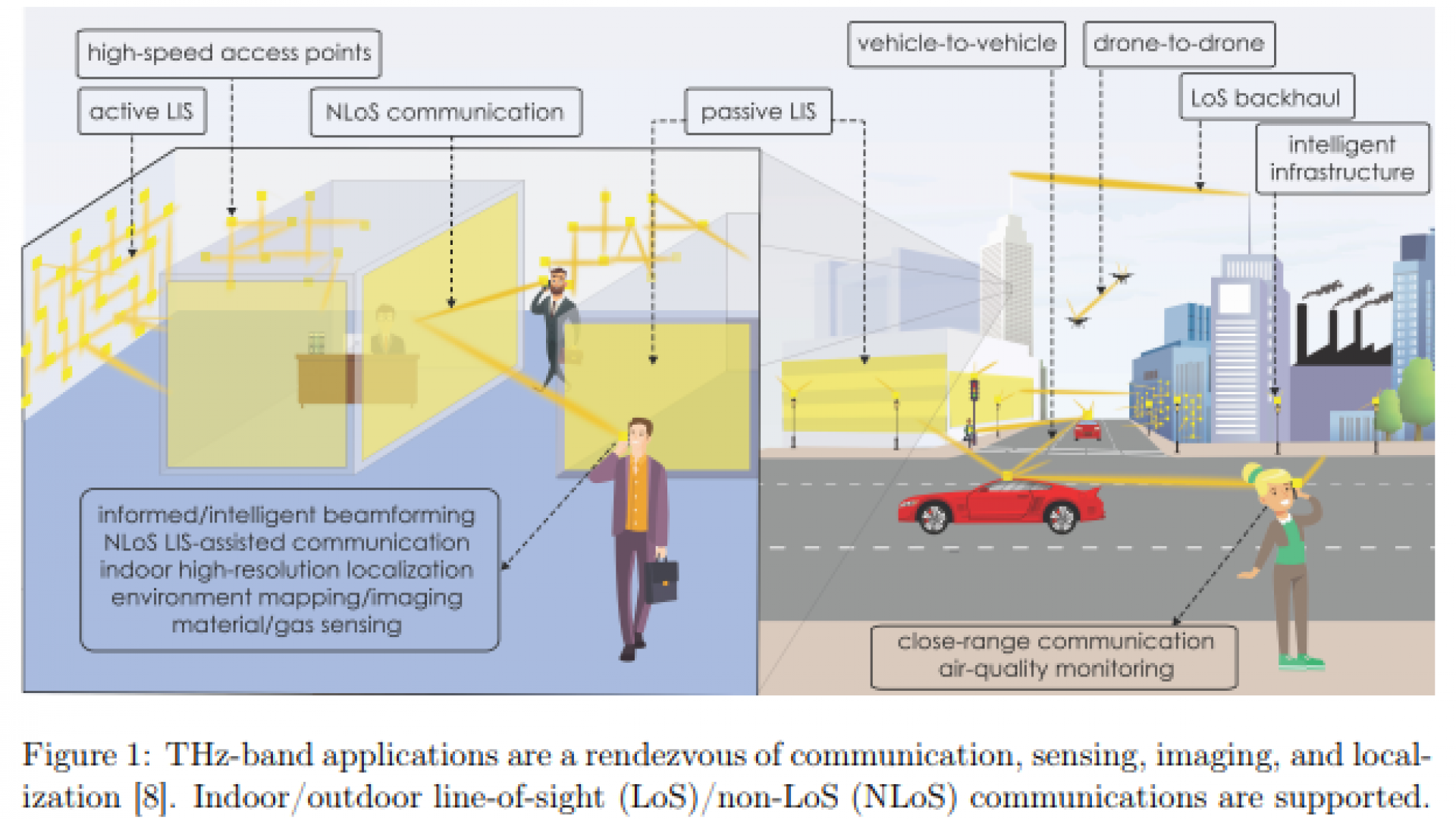 By exploiting large antenna arrays, massive multiple-input multiple-output (MIMO) systems can greatly increase spectral and energy efficiency over traditional MIMO systems. However, increasing the number of antennas comes at a cost, namely the need to perform channel estimation through training before useful data transmission can commence, which reduces the useful data rate. In our work [1], we avoid this problem completely in the single-input multiple-output (SIMO) case by performing joint channel estimation and data detection (JED). Specifically, we propose exact generalized likelihood ratio test (GLRT) optimal JED algorithms with low expected complexity, for both constant-modulus and nonconstant-modulus constellations. We show that, despite the large number of unknown channel coefficients, the expected computational complexity of these algorithms is polynomial in channel coherence time and the number of receive antennas, even when the number of receive antennas grows polynomially in the channel coherence time. Simulation results show that the GLRT-optimal JED algorithms achieve significant performance gains (up to 5 dB improvement in energy efficiency) with low computational complexity.

The approach of [1] summarized above is more futuristic and does not fit current and future standards that rely on training for channel acquisition. Hence, in a series of papers [2–4], we quantify the performance of low complexity systems that perform channel estimation followed by data detection with linear receivers (e.g., zero forcing or minimum mean square error (MMSE) receivers). Specifically, we quantify the symbol error rate of such systems (even in closed form) in the presence of channel estimation error. This allowed us [4] to optimally divide the transmitter’s power between the training phase (to minimize the estimation error) and the data transmission phase (to minimize the symbol error rate). Nevertheless, most available work in literature including our own work has focused on the case where the channel matrix consists of independent identically distributed Gaussian random variables. This is unrealistic for one expects the channel response of neighboring antennas to be highly correlated. So for our future work, we plan to address the correlated case. We have already obtained some preliminary promising results and we expect to completely characterize the correlated case in the near future.

Furthermore, typical backhaul high-frequency large MIMO deployments assume large antenna arrays at both the transmitting and receiving sides, in a deviation from conventional massive MIMO systems. Hence, our work on massive MIMO can be extended to account for this inherent symmetry, by incorporating more-complex non-linear detection schemes, such as sphere decoders and subspace detectors [5], that can combat the resultant interference in large MIMO setups.

Terahertz (THz) communications are expected to play a pivotal role in the upcoming sixth generation (6G) of wireless mobile communications. Exploiting the large available bandwidths at the THz band between 0.03 THz and 10 THz, unlike at the millimeter-wave (mmWave) band [6] between 30 gigahertz (GHz) and 300 GHz, has the potential to sustain terabit (Tb)/second data rate demands for many years to come. Since the THz band is conveniently situated between the microwave and optical bands, there has been growing interest among researchers on both sides of the spectrum to develop novel solutions for realizing THz communication infrastructures. For instance, one of the IEEE 802.15 wireless personal area networks (WPAN) study group’s missions is to explore high-frequency ranges that support multi-gigabit (Gb)/second and Tb/second links. To this end, a THz interest group (IGthz) [7] has been recently formed and several experiments on THz wave propagation have been conducted.

Due to the absence of compact THz signal sources and detectors that can operate at room temperature with high power and sensitivity (the so-called “THz gap”), THz-band applications have traditionally been in the areas of imaging and sensing [9,10]. Recent advancements in transceiver design, however, have allowed efficient THz signal generation, modulation and radiation. Hence, communication-based THz-band use cases are anticipated. In particular, THz communications can be used as alternatives to wired backbone connectivity in data centers [11] or as part of large intelligent surface (LIS) deployments [12]. The holy grail of THz communications, however, is enabling mobile wireless mid-range communications [13, 14], in the context of device-to-device, drone-to-drone, vehicular, or personal communications (figures 1 and 2). 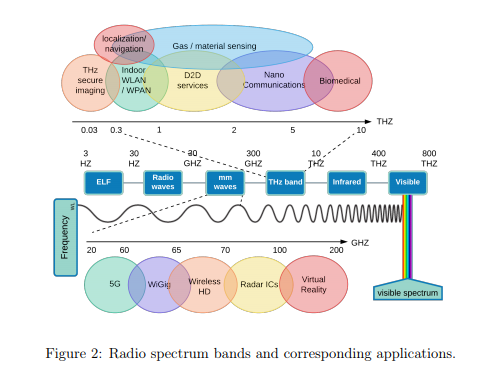 THz communications have attracted both praise and criticism. Since communication technologies are already mature at the neighboring bands, the mere necessity for exploiting the THz-band is questionable. For example, why should we settle for THz communications when cheap off-theshelf light-emitting diodes (LEDs) can support much higher data rates in visible light communications (VLC)? In our work, we argue that THz communications can complement and reap the benefits of both mmWave and VLC communications by providing alternative quasi-optical back-up paths in a heterogeneous network. Furthermore, we advocate that the peculiarity of THz sensing and imaging, combined with the high resolution localization capabilities at high frequencies, can significantly boost the performance of future communication systems by leveraging the concept of environment mapping. Such applications can be either piggybacked onto THz wireless communication or supported via dedicated resource allocation schemes.

The very large bandwidths at THz come at the cost of severe propagation losses and power limitations, which result in very short communication distances. Ultra-massive MIMO (UM-MIMO) antenna configurations [15] are thus required to combat this distance problem. Recent advancements in transceiver design are either electronic or photonic. However, novel plasmonic materials such as graphene are currently being celebrated as the material of choice at THz [16], mainly because of their electrical properties such as very high electron mobility. Graphene-based nano-antennas allow for electron tunability and reconfigurability, and they support surface plasmon polariton (SPP) waves which have very small resonant wave-lengths. This results in flexible and compact designs. In particular, graphene-based plasmonic nano-antenna arrays have been recently proposed [17], that can accommodate hundreds of antenna elements in few millimeters. 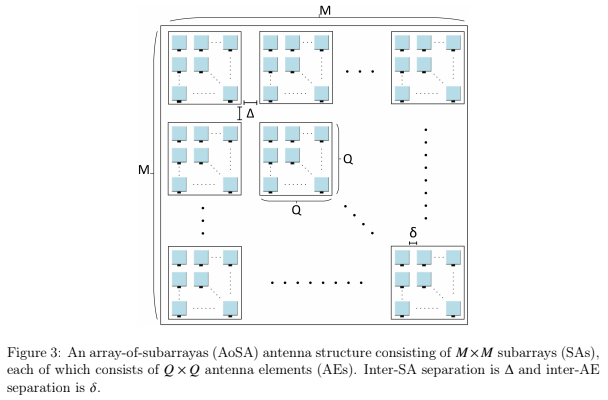 ‌While such arrays enable efficient beamforming that can increase the communication range, they fail to provide sufficient spatial degrees of freedom for spatial multiplexing. In one of our research directions, we study antenna array design techniques that can leverage the properties of densely-packed configurable arrays of subarrays of antenna elements, to increase the capacity and spectral efficiency, while maintaining acceptable beamforming performance. As shown in Fig. 3, the AEs in each SA provide the beaforming gain, and the SAs in the AoSA provide the multiplexing gain. By plotting the channel condition number as a function of inter-SA separation ∆ and communication range D (Fig. 4), three regions of operation can be observed, which provide a trade-off between system performance, communication range, and array dimensions: 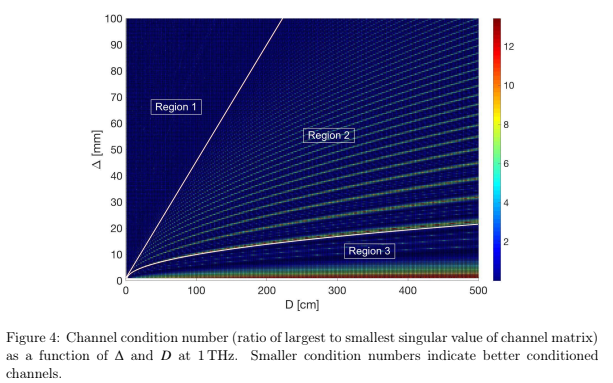 ‌Nevertheless, spatial oversampling can be considered, in which AE separations δ can be further decreased below the characteristic SPP wavelenght. This oversampling is argued to decrease the spatio-temporal frequency-domain region of support of plane waves [21], which results in multiple benefits such as reduced noise figures and increased linearity.

Moving forward, as prospect THz signal generation, modulation, and radiation methods converge, the corresponding channel model, noise, and hardware-impairment notions emerge. This paves the way to well-grounded research directions on THz-specific signal processing techniques [22] for wireless communications. The importance of signal processing at THz is further emphasized by the inevitable use of UM-MIMO systems. In particular, our research interests include, but are not limited to: multi-carrier waveform design, pulse-based versus carrier-based modulations, accurate beamforming and beamstearing criteria, optimal precoding and combining methods, low-cost channel estimation schemes, near-optimal data detection, low-complexity index modulation paradigms [18], blockage mitigation over the medium and at antenna arrays, as well as blind parameter estimation techniques in the context of intelligent cognitive radio receivers [23]. We also target formulating and solving the signal processing problems of THz imaging and sensing in a joint manner with THz communication.