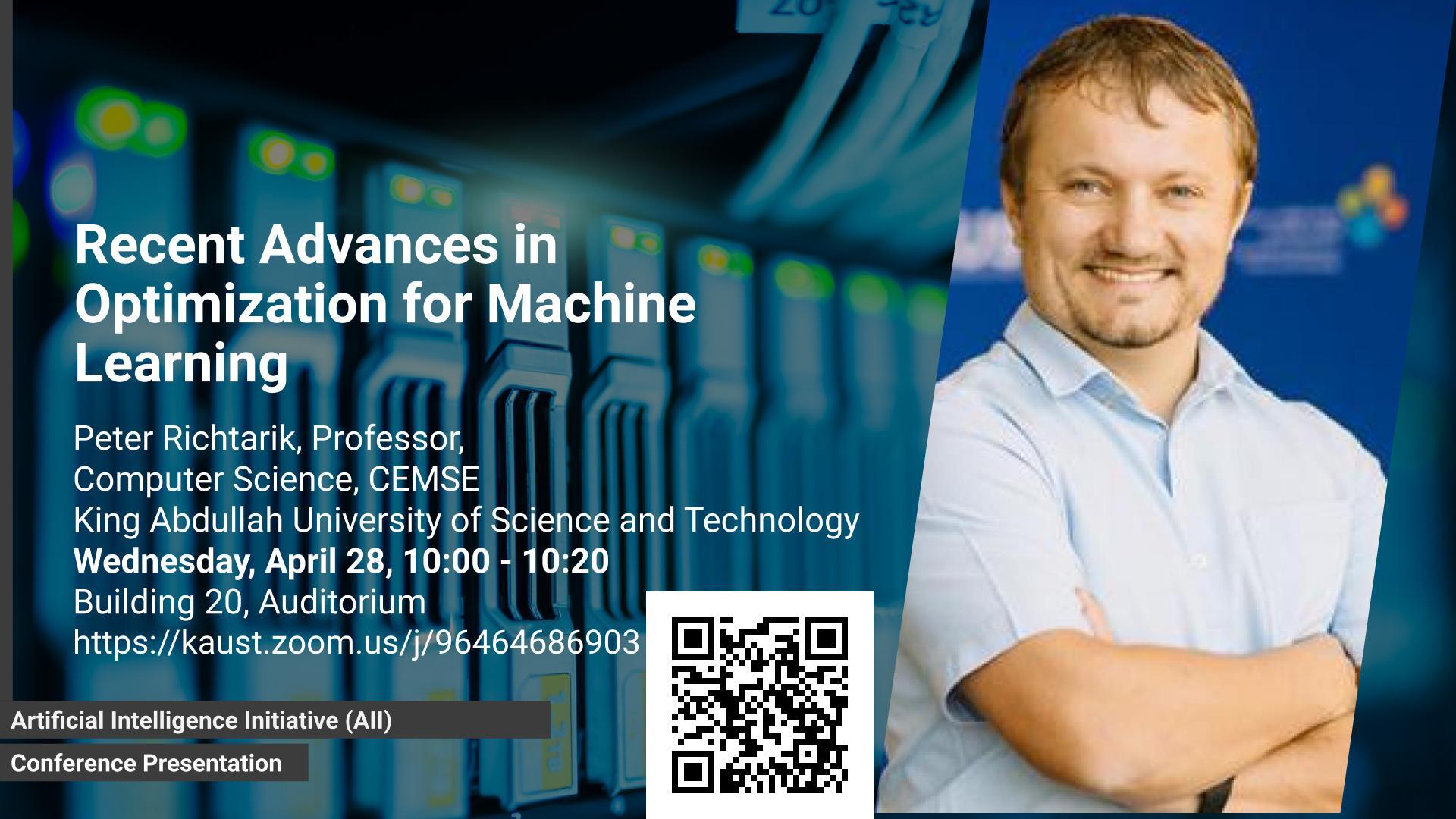 In this talk I will briefly and at a high level outline several recent (obtained in the last 2 years) research results obtained in the Optimization and Machine Learning lab at KAUST. In general, we work on the development of fundamental optimization algorithms for machine learning, including randomized, parallel, distributed, decentralized and federated algorithms, and the associated mathematical theory. Our goal is typically the development of new methods that would have state-of-the-art theoretical properties, with the explicit aim for these methods to be also practical.

I may touch on topics such as a key issue with the current understanding of stochastic gradient descent (SGD) in the all-important nonconvex regime and how we fixed it, advances in the design and analysis of first and second-order distributed training methods supporting communication compression, first convergence results for classical federated learning methods in the heterogeneous data regime, better understanding of methods based on random reshuffling of the training data, better and in some cases optimal methods for decentralized training, optimization for deep learning, and finally, the first (and theoretically and practically better) alternative to the famous error-feedback mechanism.

Peter Richtarik is a professor of Computer Science at the King Abdullah University of Science and Technology (KAUST), Thuwal, Saudi Arabia, where he leads the Optimization and Machine Learning Lab. At KAUST, he has a courtesy affiliation with the Applied Mathematics and Computational Sciences program and the Statistics program, and is a member of the Visual Computing Center, and the Extreme Computing Research Center. Prof Richtarik is a founding member and a Fellow of the Alan Turing Institute (UK National Institute for Data Science and Artificial Intelligence), and an EPSRC Fellow in Mathematical Sciences. During 2017-2019, he was a Visiting Professor at the Moscow Institute of Physics and Technology. Prior to joining KAUST, he was an Associate Professor of Mathematics at the University of Edinburgh, and held postdoctoral and visiting positions at Université Catholique de Louvain, Belgium, and University of California, Berkeley, USA, respectively. He received his PhD in 2007 from Cornell University, USA.

Prof Richtárik’s works attracted international awards, including a Best Paper Award at the NeurIPS 2020 Workshop on Scalability, Privacy, and Security in Federated Learning (joint with S. Horvath), Distinguished Speaker Award at the 2019 International Conference on Continuous Optimization, SIAM SIGEST Best Paper Award (joint with O. Fercoq), and the IMA Leslie Fox Prize (second prize, three times, awarded to two of his students and a postdoc). Several of his works are among the most read papers published by the SIAM Journal on Optimization and the SIAM Journal on Matrix Analysis and Applications. Prof Richtarik serves as an Area Chair for leading machine learning conferences, including NeurIPS, ICML and ICLR, and is an Area Editor of Journal of Optimization Theory and Applications, Associate Editor of Optimization Methods and Software, and a Handling Editor of the Journal of Nonsmooth Analysis and Optimization.