According to the JSAP, the award is presented to “the authors of outstanding papers published in the membership journal, Oyo Buturi, Japanese Journal of Applied Physics, and Applied Physics Express. These awards honor the authors of papers that are regarded as exceptional achievements in applied physics.”

His award-winning paper is based on work by Ohkawa and his colleagues at the KAUST Energy Conversion Devices and Materials (ECO Devices) Laboratory on the development of innovative indium gallium nitride (InGaN)-based red LEDs. A metalorganic chemical vapor deposition (MOCVD) system at KAUST produced the new device structures.

“I feel that the era of micro-LED displays is coming, and liquid-crystal displays (LCDs) and others will soon come to an end. Using red, green and blue (RGB) micro-LEDs, head-mounted displays for augmented reality (AR) and virtual reality (VR) can become thin, lightweight, transparent, and energy-efficient,” he explained.

Micro-LED displays will also make mobile devices thinner, lighter and extend battery life. In addition, lower light reflections may allow them to be used in sunny conditions. Due to their high energy efficiency, micro-LED displays can save huge amounts of energy compared to LCDs.

A major problem with micro-LED displays is their high fabrication costs, since RGB micro-LEDs are made from two types of semiconductors. However, Ohkawa believes that the fabrication of monolithic RGB micro-LEDs by InGaN is the solution to the issue.

“A bottleneck technology of the new displays is red LEDs made from the same semiconductors as blue and green LEDs. That semiconductor is InGaN, and the development of InGaN-based red LEDs is the topic of our awarded paper,” he noted.

“We have realized precise device structures by tunings of nm-order thicknesses, alloy compositions, and carrier concentrations using our original MOCVD technology. We could prove that the potential for achieving red LEDs is not a dream, but a reality. That is the reason for the award.”

A lasting contribution to applied physics

The research that Ohkawa conducts at KAUST is focused on the application of energy-conversion phenomena towards a more sustainable future. The highly regarded researcher’s contributions to applied physics and optoelectronics have resulted in his technologies being adopted by many companies and institutions worldwide.

Three notable contributions include the first doping technologies for II-VI compounds to realize n- and p-types. Notably, the nitrogen plasma source for the p-type has become the standard technology for molecular-beam epitaxy growth of nitride semiconductors.

The second is MOCVD technology for nitride semiconductors. The technology has developed InGaN-based RGB full-color LEDs and made it possible to study MOCVD reactors scientifically. The third is the invention of a nitride photocatalyst for water splitting and artificial photosynthesis.

Regarding the lab’s recent research, he noted: “based on efficient red LEDs, we are challenging the development of micro-LEDs. The device size is 10 μm square or less, and we have successfully reduced it to 5 μm. Its light output density is a world record, and the value is five times more than the conventional red LED material of AlGaInP.

“Additionally, we are trying to make it the same level as InGaN blue micro-LEDs. One of the competitive research groups in this InGaN red LEDs is a team at the University of California, Santa Barbara, led by Professor Shuji Nakamura, the 2014 Nobel Prize winner in Physics for the development of blue LEDs.”

This December, upon the invitation of Professor Hiroshi Amano, the 2014 Nobel Prize winner in Physics, Ohkawa will deliver a talk about InGaN-based red LEDs at Nagoya University, Japan. 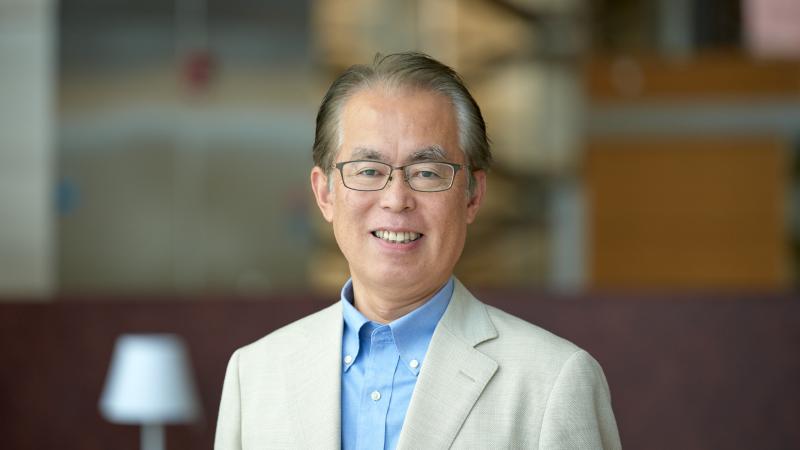