Yating Wan, assistant professor of electrical and computer engineering, joins KAUST as a member of the KAUST Photonics Laboratory from her most recent position as a postdoctoral research associate at the University of California, Santa Barbara (UCSB), U.S.

Wan—who received her B.Sc. degree ('12) in optical science and engineering optics from Zhejiang University, China, and her Ph.D. degree ('17) from the Hong Kong University of Science and Technology—was a member of Professor John Bowers’ optoelectronics group at UCSB for five years.

Her research focuses on silicon photonics (SiPh), particularly the integration of on-chip light sources for short-reach communication links. Other related applications she is interested in include biosensors/bioimaging, energy harvesting, machine vision, and quantum information processing.

Wan's decision to join KAUST was influenced in part by the University's world-class facilities, highly supportive research funding, and a forward-looking, flexible approach to international collaboration. The potential to collaborate with KAUST Professors Boon Ooi and Xiaohang Li as they continue to investigate the integration of various photonic devices also influenced her decision to join the Photonics Laboratory.

“I have found a good match with KAUST. While here, I believe I can further enrich my existing experience in designing, fabricating, and characterizing semiconductor lasers and photonic integrated circuits,” Wan noted.

Her intent at KAUST is to become a world leader in SiPh research and extend her prior work developing wafer-level process flows for seamless integration of photonics and electronics.

Due to recent breakthroughs, SiPh has become an attractive platform for photonic integration from both a cost and performance standpoint. The same forces that drove the evolution from discrete optical modules to integrated photonic chips will continue to shape photonic integrated circuits to meet the increasing demands on cost, size, weight, and power while delivering equal or better performance than their predecessors.

“At KAUST, I intend to apply this technology to demonstrate proof-of-principle for various applications including, but not limited to, optical computing, Light Detection, and Ranging, chip-scale wearable sensors and optical memory.”

Discovering the “sweet spot” between science and engineering

For Wan, photonics inhabits the “sweet spot” between science and engineering. It is a science that allows her to engage in research with unmeasurable real-world application potential and the ability to affect the daily life of millions while providing a level of engagement that pure engineering simply does not possess.

An example of this influential, real-world lab-to-industry impact is a device invented in her current supervisor John Bowers’ lab—the first prototype heterogeneous laser in 2006. Ten years after it was created, the first commercial products related to this research were announced, with Intel’s market share of silicon photonics increasing to more than 50 percent within just two years.

“Now millions of transceivers have been shipped in, and 1.6 Tbps silicon photonic integrated circuits have enabled the first fully functional photonic engine module co-packaged with an Ethernet switch. This is exciting, and it gives me a research role model to follow. I hope that one day I can also make some progress in academia that can be put to market and really influence the industry and the world,” she concluded. 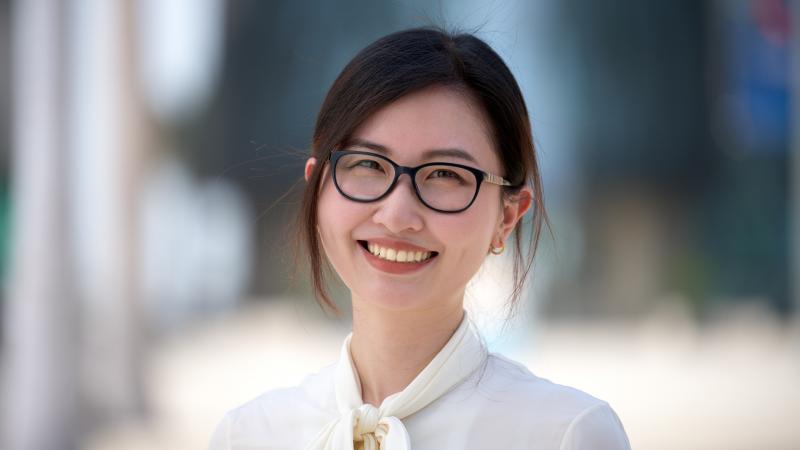