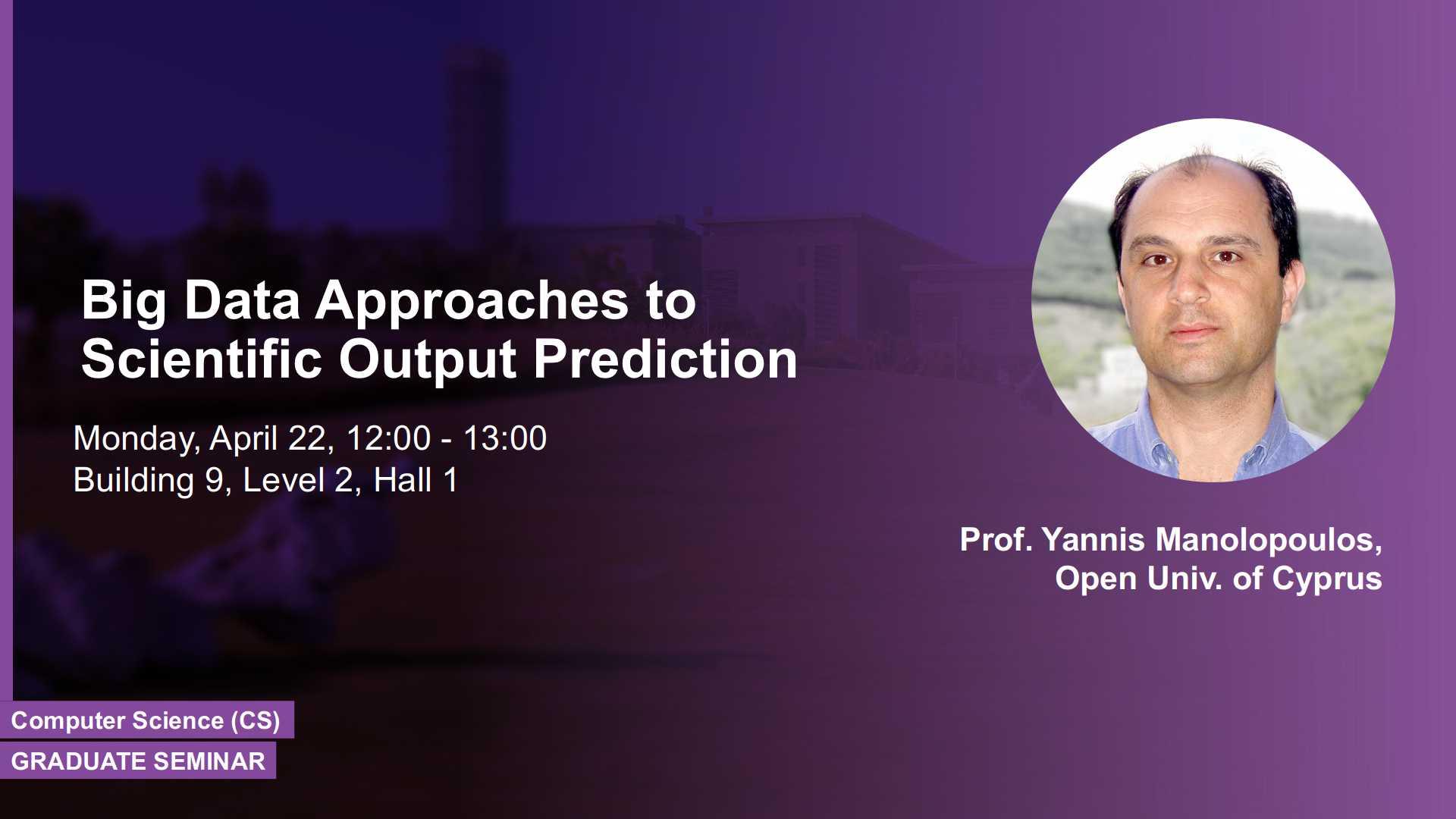 During the past two decades the availability of big scholarly data repositories such as Google Scholar, Elsevier Scopus offered tremendous opportunities to analyze scientific production and help develop models for it. The development of computerized analysis methods for these voluminous scholarly data allows to understand, quantify and predict research activities and the corresponding outcomes. The focus of this talk is on techniques to forecast future impact of a scientist; this is a very interesting problem because it allows for making effective hiring/promotion decisions and research fund allocation, among others. In the context of the talk, models for paper citation prediction and scientist impact prediction will be surveyed, covering recent progress in graph-theoretic and machine-learning based methodologies.

Yannis Manolopoulos is Professor and Vice-rector of the Open University of Cyprus. He has been with the University of Toronto, the  University of Maryland at College Park, the University of Cyprus and  Aristotle University of Thessaloniki, where he served as Head of the Department of Informatics. He has also served as Rector of the University of Western Macedonia in Greece and Vice-Chair of the Greek  Computer Society. His research interest focuses in Data Management. He  has co-authored 5 monographs and 8 textbooks in Greek, as well as >300   journal and conference papers. He has received >13000 citations from   >2000 distinct academic institutions (h-index=52). He has also  received 5 best paper awards from SIGMOD, ECML/PKDD, MEDES (2) and   ISSPIT conferences and has been invited as keynote speaker in 15 international events. He has served as main co-organizer of several   major conferences (among others): ADBIS 2002, SSTD 2003, SSDBM 2004,  ICEIS 2006, EANN 2007, ICANN 2010, AIAI 2012, WISE 2013, CAISE 2014,  MEDI 2015, ICCCI 2016, TPDL 2017, DAMDID 2017, DASFAA 2018, EAIS 2018, WIMS 2018, IDEAS 2019, MEDES 2019, WI 2019, SOFSEM 2020. He has also acted as evaluator for funding agencies in Austria, Canada, Cyprus, Czech Republic, Estonia, EU, Georgia, Greece, Hong-Kong,Italy, Lithuania, Poland and Russia. Currently, he serves in the Editorial Boards of the following journals (among others): Information  Systems, World Wide Web, Computer Journal.