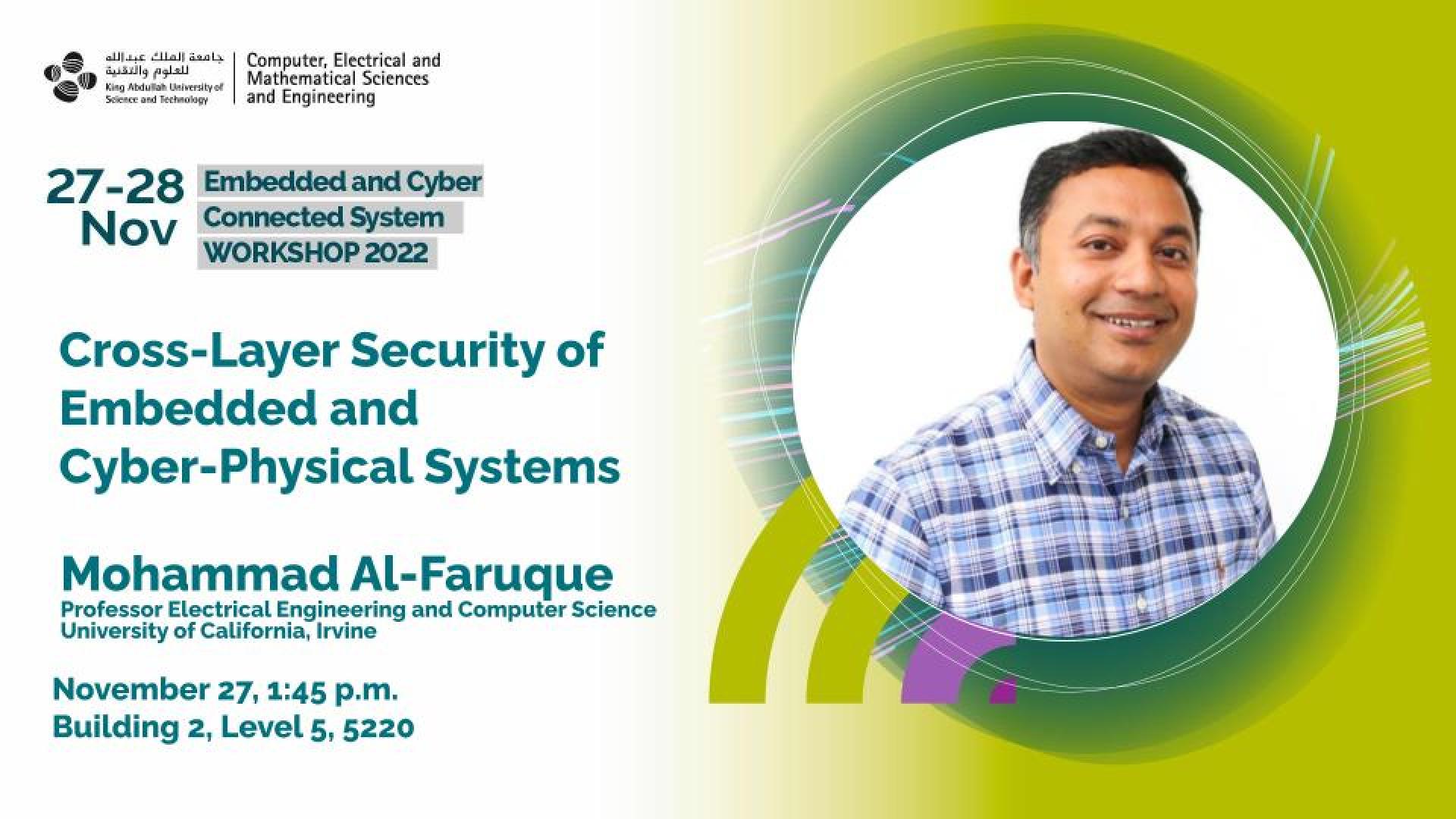 Cyber-physical systems (CPS) are engineered systems that are built from, and depend upon, the seamless integration of computation and physical components [NSF]. Embedded systems comprising of hardware and software systems are the major enabling technology for these cyber-physical systems. Today, CPSs can be found in security-sensitive areas such as aerospace, automotive, energy, healthcare, manufacturing transportation, entertainment, and consumer appliances. Compared to the traditional information processing systems, due to the tight interactions between cyber and physical components in CPSs and closed-loop control from sensing to actuation, new vulnerabilities are emerging from the boundaries between various layers and domains. In this keynote talk, Prof. Al Faruque will discuss how new vulnerabilities are emerging at the intersection of various components and subsystems and their various hardware, software, and physical layers. Several recent examples from various cyber-physical systems will be presented in this talk. To understand these new vulnerabilities a very different set of methodologies and tools are needed. Defenses against these vulnerabilities demand also new hardware/software co-design approaches. The talk will highlight recent developments in this regard. The major goal of this talk will be to highlight various research challenges and the need for novel scientific solutions from the larger research community.

Mohammad Al Faruque is with the University of California Irvine (UCI) as a full Professor and directing the Embedded and Cyber-Physical Systems Lab. He is currently the IEEE CEDA Distinguished lecturer. He served as an Emulex Career Development Chair from October 2012 till July 2015. Before, he was a Research Scientist with Siemens Corporate Research and Technology in Princeton, NJ. Prof. Al Faruque received his B.Sc. degree in Computer Science and Engineering (CSE) from Bangladesh University of Engineering and Technology (BUET) in 2002, and M.Sc. and Ph.D. degrees in Computer Science from Aachen Technical University and Karlsruhe Institute of Technology, Germany in 2004 and 2009, respectively. His current research focuses on the system-level design of embedded and Cyber-Physical-Systems (CPS) with a special interest in low-power design, CPS security, etc. He is the author of 2 published books. Besides many other awards, he is the recipient of the School of Engineering Mid-Career Faculty Award for Research 2019, the IEEE Technical Committee on Cyber-Physical Systems Early-Career Award 2018, the IEEE CEDA Ernest S. Kuh Early Career Award 2016, Thomas Alva Edison Patent Award 2016 from the Edison Foundation, the 2016 DATE Best Paper Award, the 2015 DAC Best Paper Award, and the 2009 IEEE/ACM William J. McCalla ICCAD Best Paper Award. He is also the recipient of the UCI Academic Senate Distinguished Early-Career Faculty Award for Research 2017 and the School of Engineering Early-Career Faculty Award for Research 2017. Besides 150+ IEEE/ACM publications in premier journals and conferences, he holds 11 US patents. Moreover, his work has been featured in the New York Times, the Los Angeles Times, Newsweek, ACM Communication, Science Magazine, etc., among many other national and international newspapers and magazines. Prof. Al Faruque’s research is currently funded by NSF, NIH, DOE, DoD, DARPA, DOT, DoEd, ONR, UCOP, Caltrans, and several industries. Among many important professional service roles, Prof. Al Faruque served as the Program Co-Chair in the ACM/IEEE International Conference on Cyber-Physical Systems in 2021 (ICCPS’21), the General Co-Chair for the ICCPS 2022, and the Program Chair of the ACM/IEEE International Conference on Hardware/Software Codesign and System Synthesis (CODES+ISSS’22) and CODES+ISSS 2023.