For Ghanem to have had the impact of his research acknowledged in such a way by the AHSF is particularly telling, bearing in mind that only 13 researchers received an award from an initial pool of 477 individual submissions.

‘It is a big honor to have been awarded this year’s Shoman Award for Machine Learning and Big Data. Being recognized for outstanding research is always rewarding and humbling,” Prof. Ghanem said of his Shoman Award.

“The Shoman Award holds special significance to me because it sheds more light on research by Arab researchers like myself. Being recognized by one’s research community can be seen as further vindication of one’s research agenda and serves to encourage an individual to continue pursuing research excellence. So, being awarded the Shoman Award this year inspires me to do more and better.

“Moreover, getting an award that was previously awarded to revered KAUST researchers (Profs. Mohamed-Slim Alouini and Omar Knio), who I look up to, is just icing on the cake,” he added.

Professor Ghanem’s research interests focus on topics in computer vision and machine learning. In his role as lead of the KAUST Image and Video Understanding Lab (IVUL), Ghanem, and his research team, work on key topics relating to both the computer vision (CV) and machine learning (ML) communities. The IVUL’s research drive falls under three central research themes: video understanding, visual computing for automated navigation, and addressing the fundamental research problems found in CV and ML.

In an increasingly highly globalized world, international research collaborations have become easier to forge, and the MENA region has capitalized on this opportunity. Ghanem firmly believes that modern-day Arab researchers have both the aspirations and potential to match the progress and innovation of their academic forefathers.

“Centuries ago, the Arab world was a leading powerhouse of academic progress and innovation. Since this leading role is generally not the case anymore, I believe that Arab researchers hold even more responsibility now to excel in their respective scientific fields, albeit in or outside the MENA region,” he emphasized.

“I do believe that the region has the potential to go beyond the status quo and bridge the scientific and research divide that separates it from the global leaders. To undertake such an ambitious endeavor, proportionally ambitious efforts should be made. I see numerous examples of this happening in the region, and I hope they will continue to be supported and nurtured in the future.

“For me, KAUST has been the prime example of our ambition to advance scientific research in the MENA region. In a relatively short time, the University has been successful in building a globally competitive and prominent brand in various scientific fields, thus pushing the envelope of science and technology in the region. I am very proud to contribute to this ongoing, and accelerating, KAUST effort, of which this year’s Shoman Award is a humbling attestation,” Ghanem concluded. 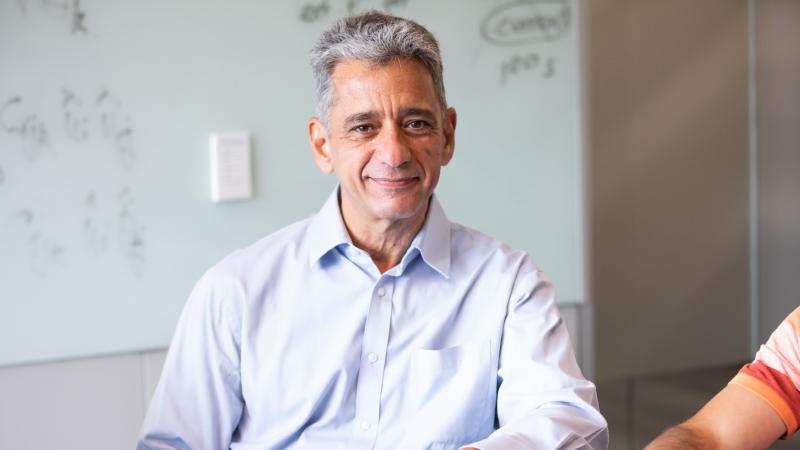