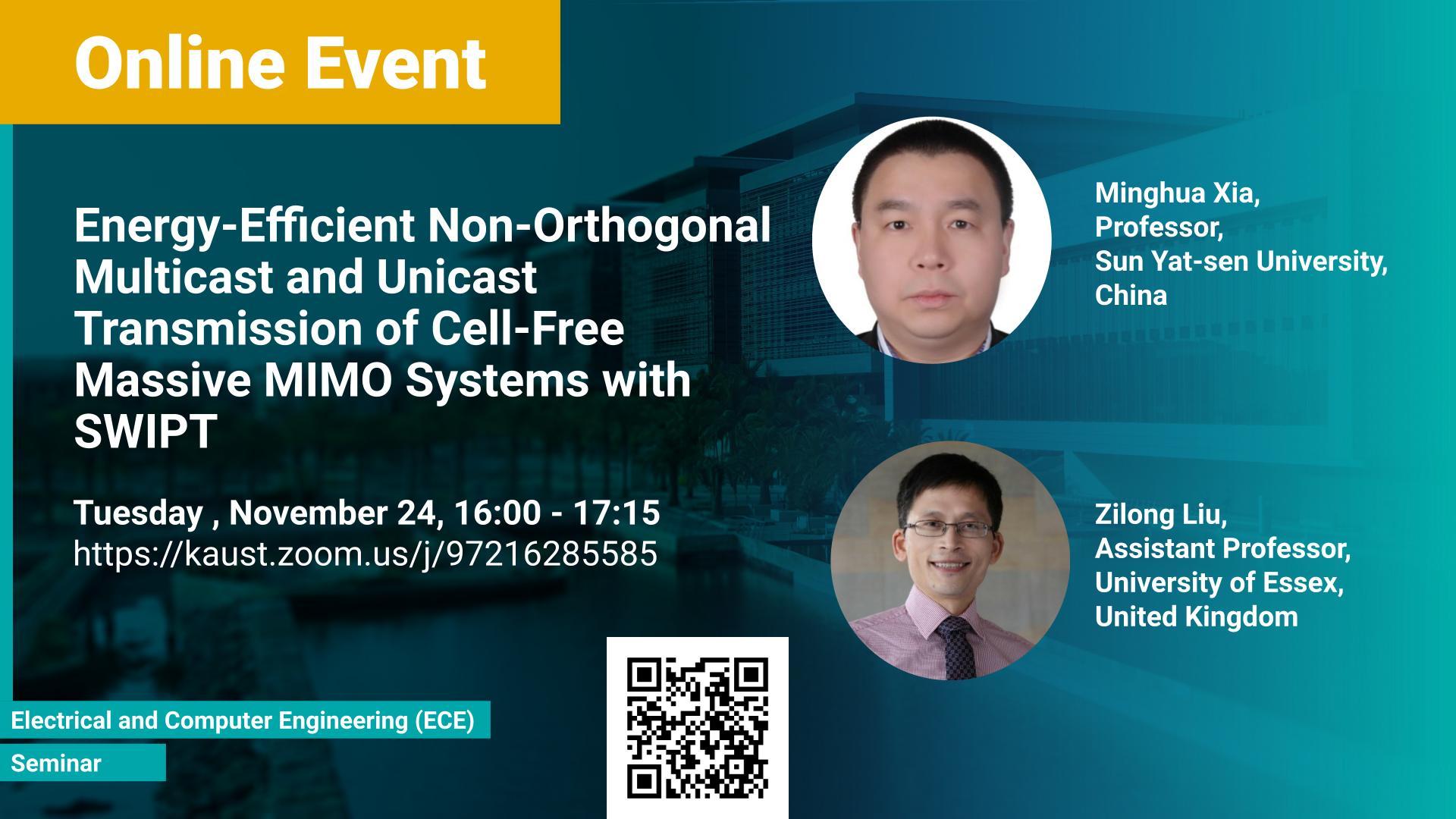 Minghua Xia:To suit massive connectivity of machine-type communications in smart cities, this talk discusses the energy-efficient resource allocation for layered-division multiplexing (LDM) based non-orthogonal multicast and unicast transmission in cell-free massive multiple-input multiple-output (MIMO) systems, where each user equipment (UE) performs wireless information and power transfer simultaneously. To begin with, the achievable data rates for multicast and unicast services are derived in closed form, as well as the received radio frequency (RF) power at each UE. Based on the analytical results, a nonsmooth and nonconvex optimization problem for energy efficiency (EE) maximization is formulated, which is however a challenging fractional programming problem with complex constraints. To suit the massive access setting, a first-order algorithm is developed to find both initial feasible point and the nearly optimal solution. Moreover, an accelerated algorithm is designed to improve the convergence speed. Numerical results demonstrate that the proposed first-order algorithms can achieve almost the same EE as that of second-order approaches yet with much lower computational complexity, which demonstrates the superiority of the proposed algorithms for massive access in smart city applications. Abstract text.

Zilong Liu: Non-orthogonal multiple access (NOMA) is an emerging paradigm for the enabling of massive connectivity in 5G networks and beyond. There are two main types of NOMA systems, i.e., power-domain NOMA (PD-NOMA) and code-domain NOMA (CD-NOMA), in which multiple users are separated by assigning different power levels and different codebooks, respectively. Despite numerous research attempts on these two types of NOMA systems, it is intriguing to ask which one outperforms the other from a practical implementation point of view. New advances on NOMA communications will be introduced, including the recent standardization activities in 3GPP, error rate comparison of different NOMA systems (e.g., sparse code multiple access and dense code multiple access), as well as new applications of NOMA with other disruptive wireless technologies.
This talk will be based on a recent preprint “Sparse or Dense: A Comparative Study of Code-Domain NOMA Systems” at https://arxiv.org/abs/2009.04148.

Minghua Xia (M’12-SM’20) received the Ph.D. degree in Telecommunications and Information Systems from Sun Yat-sen University, Guangzhou, China, in 2007.
From 2007 to 2009, he was with the Electronics and Telecommunications Research Institute (ETRI) of South Korea, Beijing R&D Center, Beijing, China, where he worked as a member and then as a senior member of engineering staff. From 2010 to 2014, he was in sequence with the University of Hong Kong, Hong Kong, China; King Abdullah University of Science and Technology, Jeddah, Saudi Arabia; and the Institute National de la Recherche Scientifique (INRS), University of Quebec, Montreal, Canada, as a Postdoctoral Fellow. Since 2015, he has been a Professor with Sun Yat-sen University. Since 2019, he has also been an Adjunct Professor with the Southern Marine Science and Engineering Guangdong Laboratory (Zhuhai). His research interests are in the general areas of wireless communications and signal processing.
Dr. Xia received the Professional Award at the IEEE TENCON, held in Macau, in 2015. He served as a TPC Symposium Chair of IEEE ICC’2019. He currently serves as a TPC Symposium Chair of IEEE ICC’2021, and an Associate Editor for the IEEE Transactions on Cognitive Communications and Networking, the IET Smart Cities, and the Frontiers in Communications and Networks. He was recognized as an Exemplary Reviewer by IEEE Transactions on Communications in 2014, IEEE Communications Letters in 2014, and IEEE Wireless Communications Letters in 2014 and 2015.

Zilong Liu is a Lecturer (Assistant Professor) at the School of Computer Science and Electronics Engineering, University of Essex. He received his PhD (2014) from School of Electrical and Electronic Engineering, Nanyang Technological University (NTU, Singapore), Master Degree (2007) in the Department of Electronic Engineering from Tsinghua University (China), and Bachelor Degree (2004) in the School of Electronics and Information Engineering from Huazhong University of Science and Technology (HUST, China). From Jan. 2018 to Nov. 2019, he was a Senior Research Fellow at the Institute for Communication Systems (ICS), Home of the 5G Innovation Centre (5GIC), University of Surrey, during which he focused on the air-interface design of 5G communication networks (e.g., machine-type communications, V2X communications, 5G New Radio). Prior to his career in UK, he spent nine and half years in NTU, first as a Research Associate (Jul. 2008 to Oct. 2014) and then a Research Fellow (Nov. 2014 to Dec. 2017). His PhD thesis “Perfect- and Quasi- Complementary Sequences”, focusing on fundamental limits, algebraic constructions, and applications of complementary sequences in wireless communications, has settled a few long-standing open problems in the field. His research lies in the interplay of coding, signal processing, and communications, with a major objective of bridging theory and practice as much as possible.
He is a Senior Member of IEEE and an Associate Editor of IEEE Access and Frontiers in Communications and Networks. He is a General Co-Chair of the 2021 International Workshop on Signal Design and its Applications in Communications (IWSDA’2021) and a TPC Co-Chair of the 2020 IEEE International Conference on Advanced Networks and Telecommunications Systems (ATTS’2020). Besides, he was/is a TPC member of a number of IEEE Conferences/Workshops (e.g., ICC, GLOBECOM, WCSP, ICCS, SETA). He was a GIAN Course Instructor in the course “Mathematical Framework of Sequence Design for Wireless Communications” hosted by IIT Patna in January 2018. So far, he has published over 50 peer-reviewed journal papers and 26 conference papers that cover a wide range of topics in coding and signal processing for communication systems. Details of his research can be found at: https://sites.google.com/site/zilongliu2357.