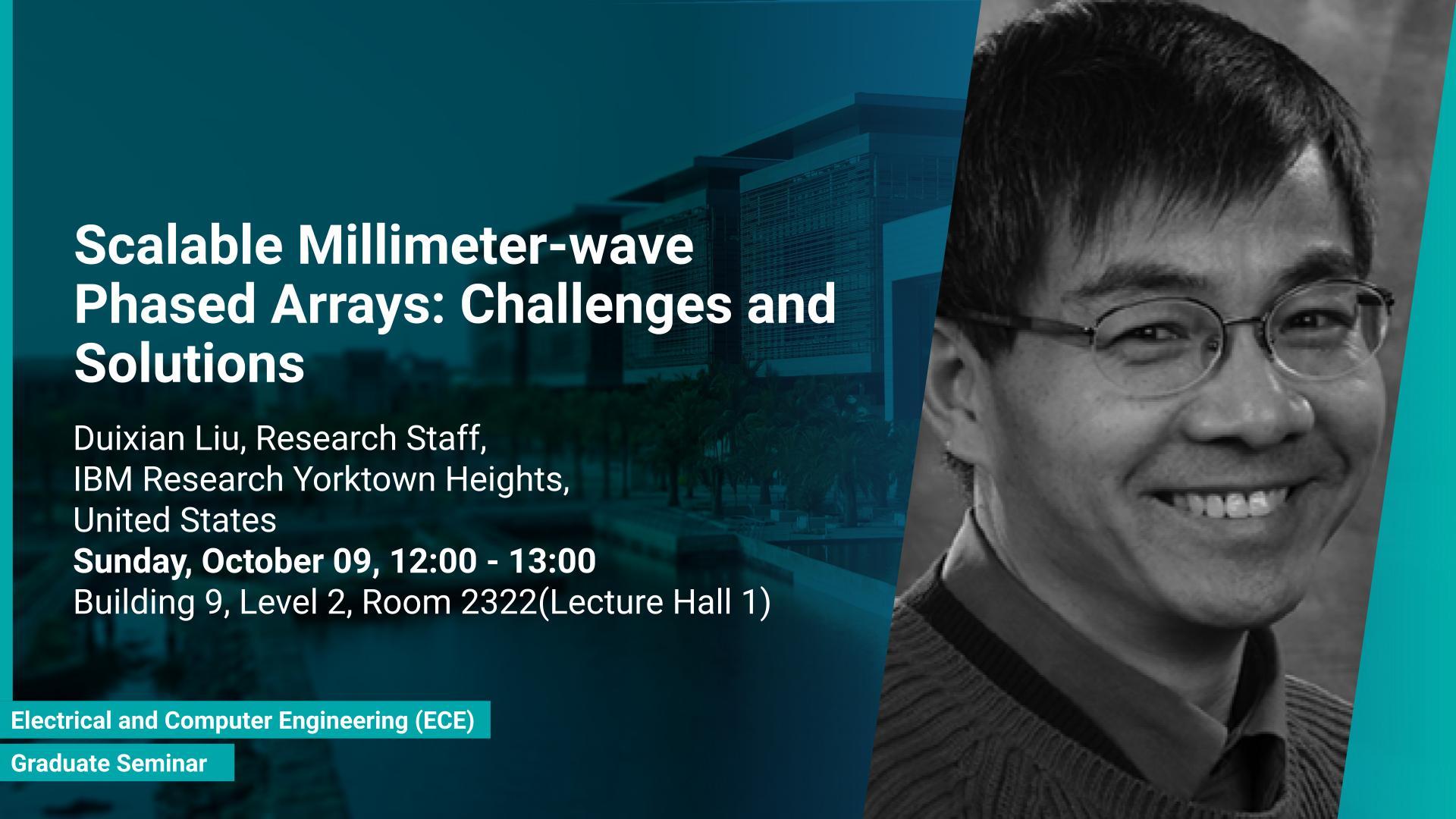 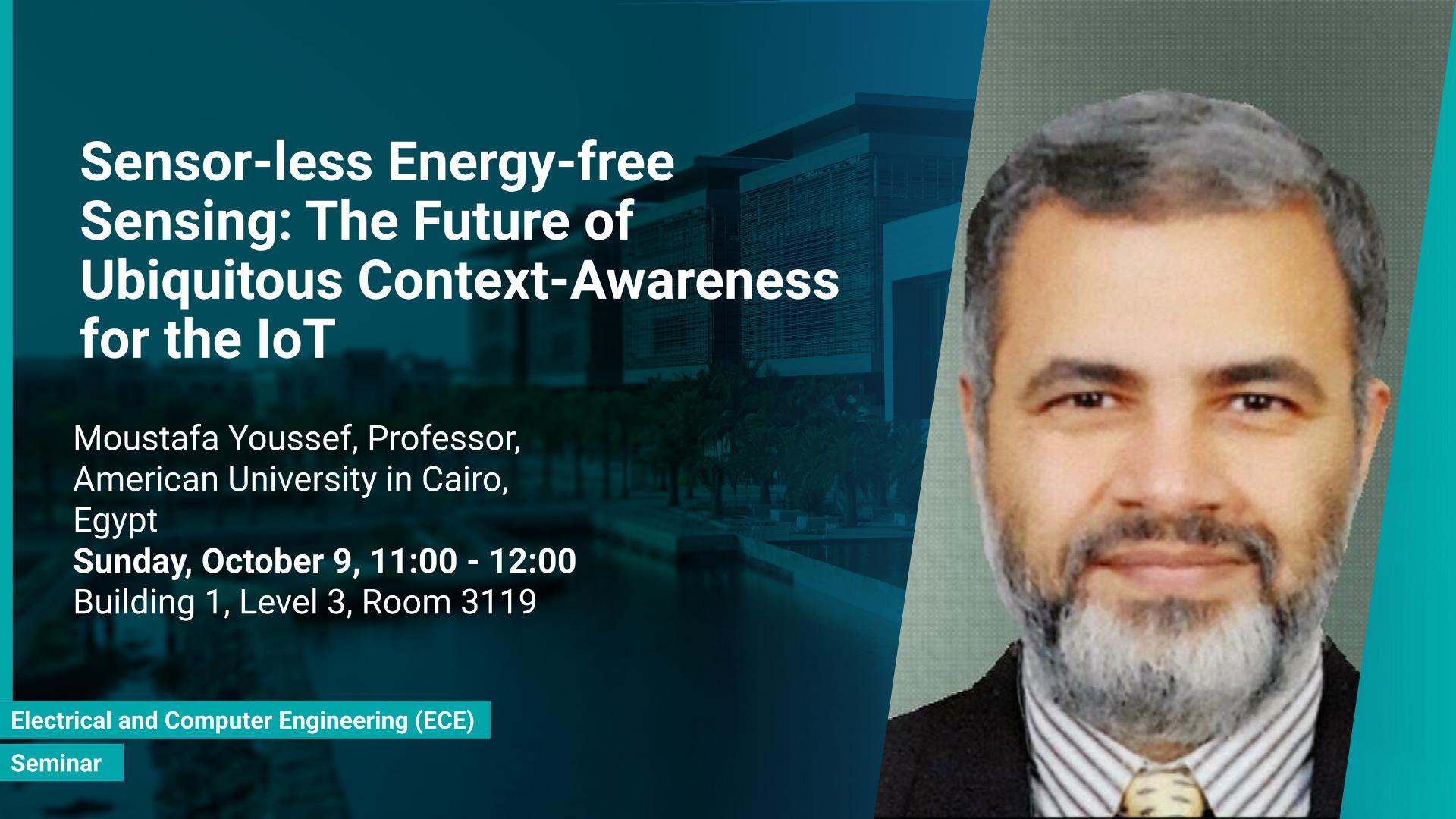 Sensor-less Energy-free Sensing: The Future of Ubiquitous Context-Awareness for the IoT

Mohamed-Slim Alouini
Many IoT devices are expected to be limited in capability and run with minimal power sources/limited batteries. To extend their lifetime, and autonomy, and reduce the cost of deployment, we introduce the concepts of sensor-less and energy-free sensing, where we sense the environment without using any external sensors while consuming minimal or no energy. 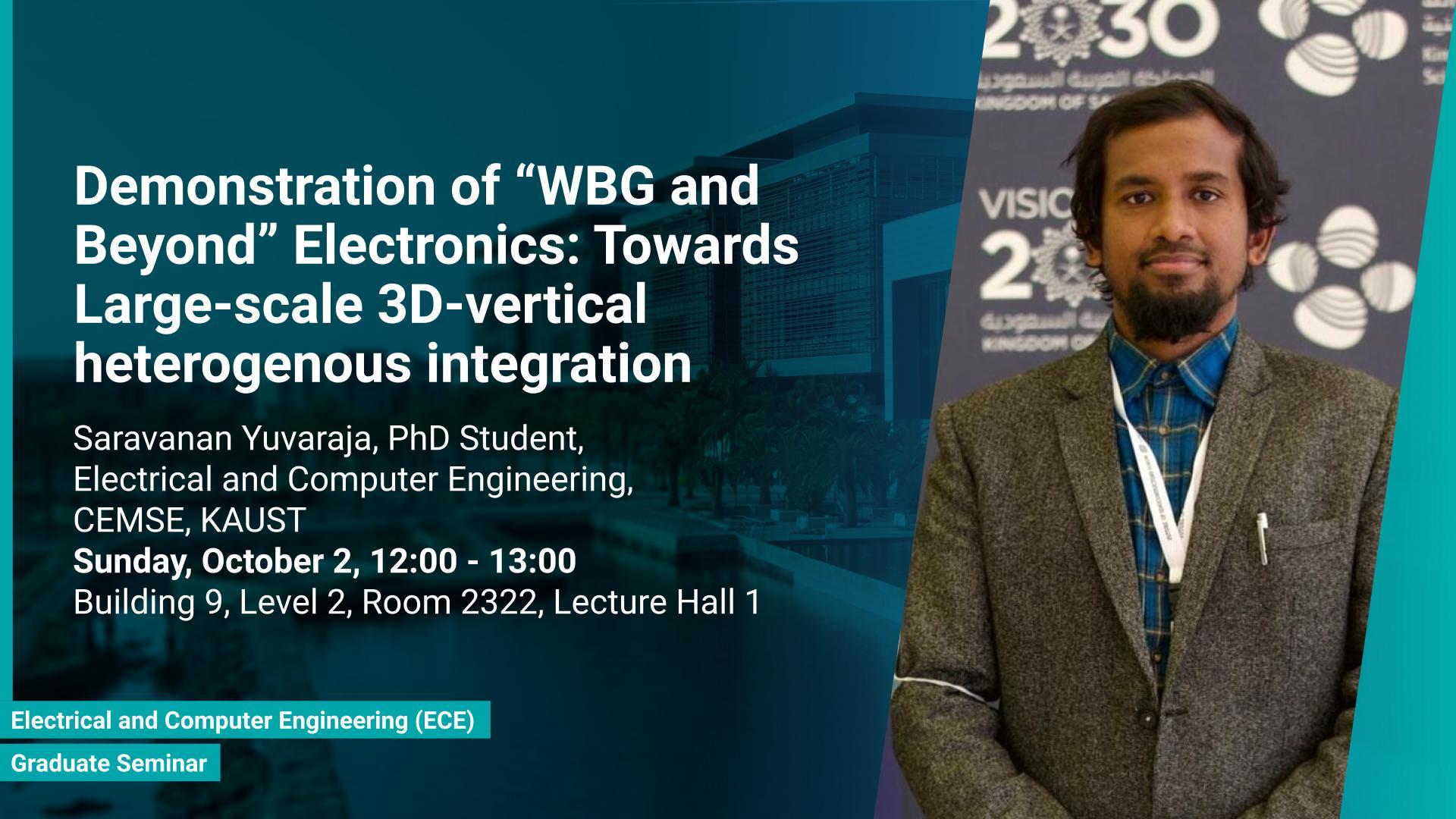 Demonstration of “WBG and Beyond” Electronics: Towards Large-scale 3D-vertical heterogenous integration

Xiaohang Li
With the continuous reduction of chip feature size, the continuation of Moore's Law becomes increasingly difficult and heterogeneous integration has become one of the important orientations of electronic technology. 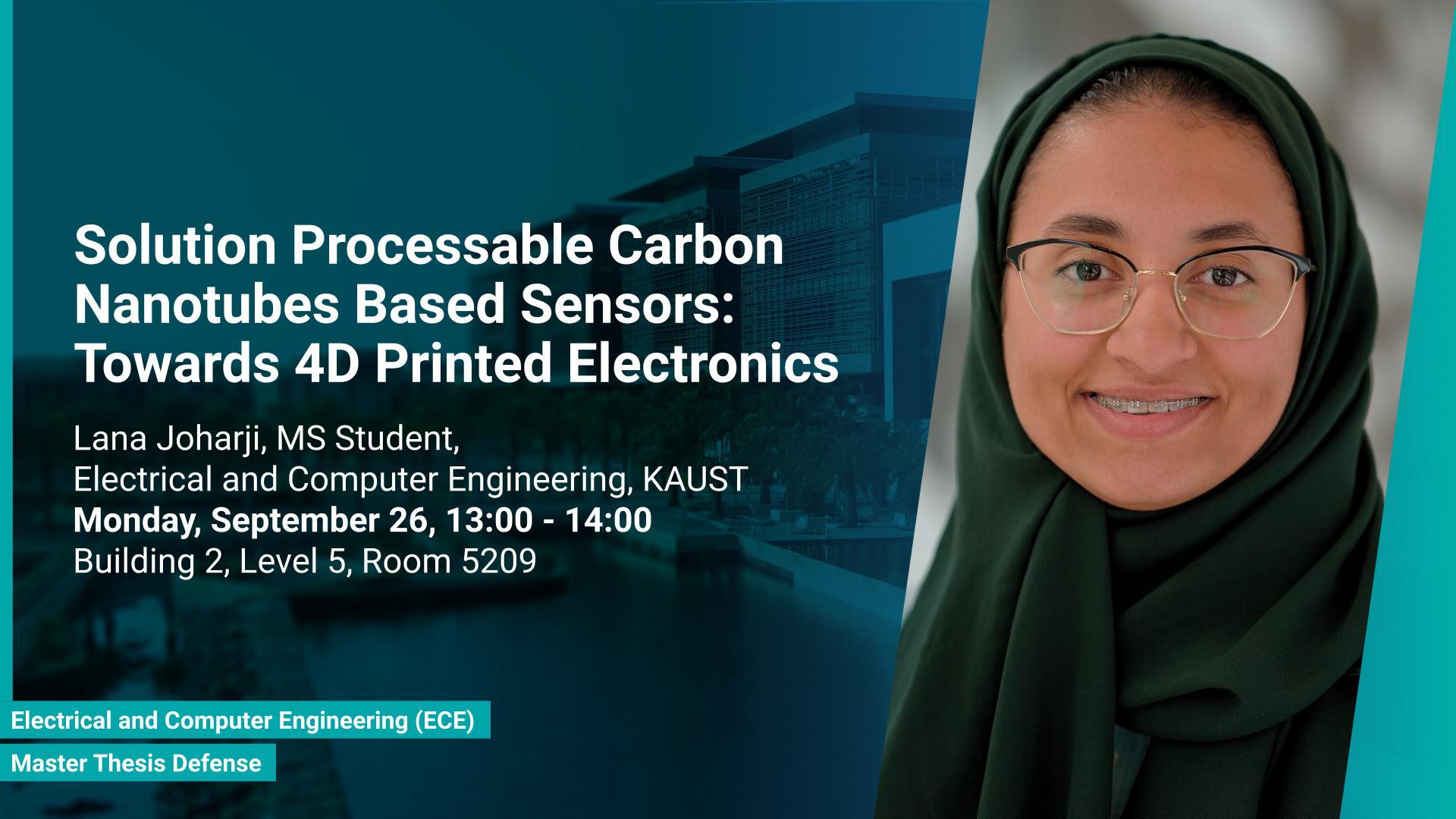 Nazek El-Atab
In this thesis, we focus on the design and development of 4D printed sensors. Carbon nanotubes (CNTs) are used as the active sensing medium as they have proven to be ideal for application in sensors due to their high electric conductivity, stability, and mechanical flexibility. The effect of a heat-shrinkable substrate on the electronic and structural properties of CNTs is analyzed in depth, followed by the application in temperature, humidity, and pressure sensors. The results show that the 4D effect results in a more porous yet more conductive film due to an increase in the charge carrier concentration, enabling an improved sensitivity of the devices and allowing us to tune the selectivity based on the shrinking percentage. The developed device was fabricated using a rapid, cost-effective technique that is independent of advanced fabrication facilities to expand its applications to low-resource settings and environments. 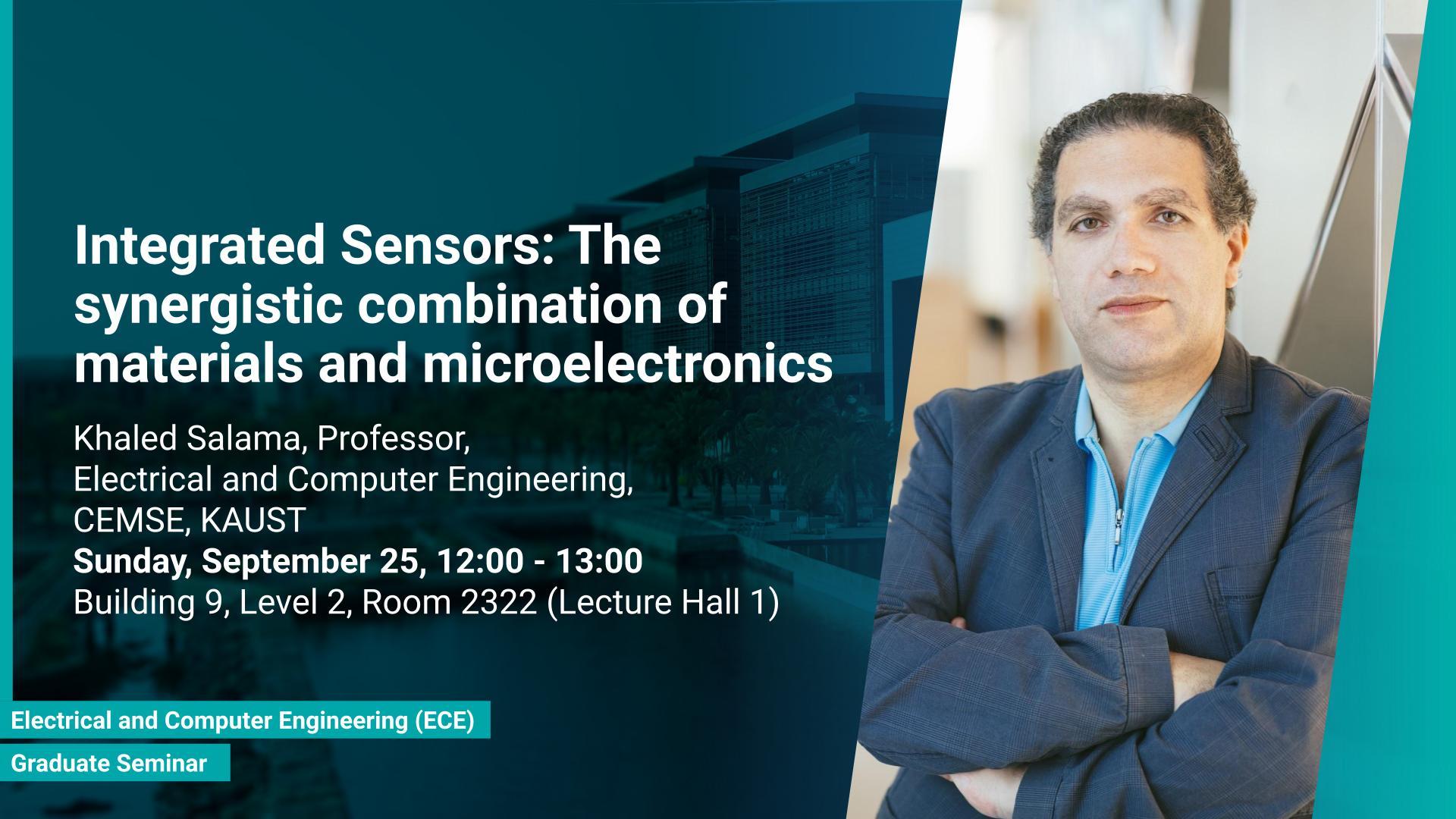 Integrated Sensors: The synergistic combination of materials and microelectronics

Khaled Nabil Salama
In this talk we will present the design and implementation of hybrid integrated sensors using integrated circuits. We will discuss the advantages and shortcomings of sensors built in silicon-based fabrication processes and examine, in detail, their integrated circuit topologies. We will conclude with examples of solutions that worked in the field which we domnetarted at KAUST. 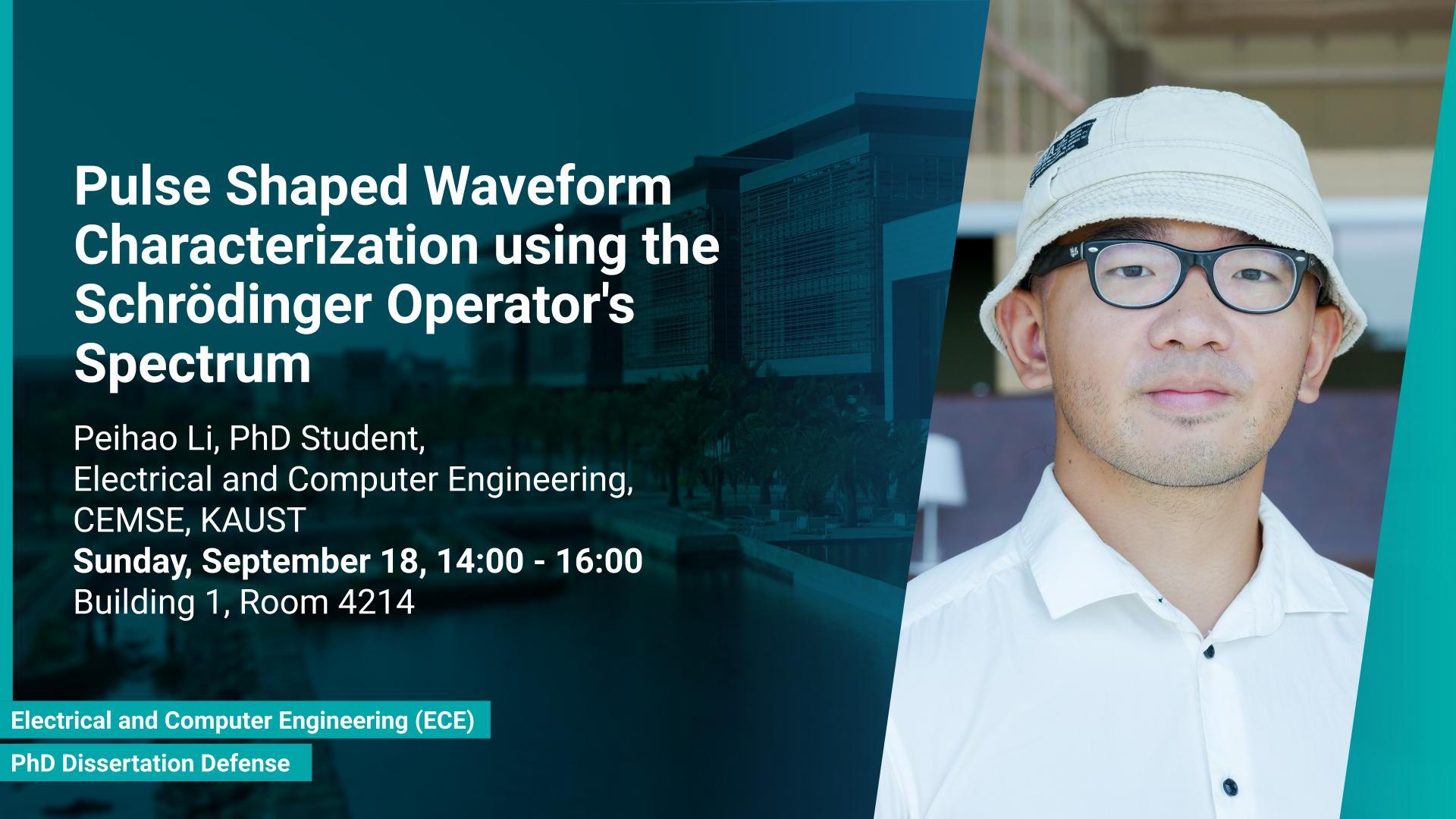 Peihao Li
Pulse-shaped signal characterization is a fundamental problem in signal processing. One recently developed tool available to analyze non-stationary pulse-shaped waveforms with a suitable peak reconstruction is semiclassical signal analysis (SCSA). SCSA is a signal representation method that decomposes a real positive signal y(t) into a set of squared eigenfunctions through the discrete spectrum of the Schrödinger operator which is of particular interest. Beginning with an introduction to the young method, this dissertation discusses the relevant properties of SCSA and how they are utilized in signal denoising and biomedical application. Based on this, different frameworks and methodologies are proposed to leverage the advantages of the SCSA, especially in the pulse-shaped signal analysis field. 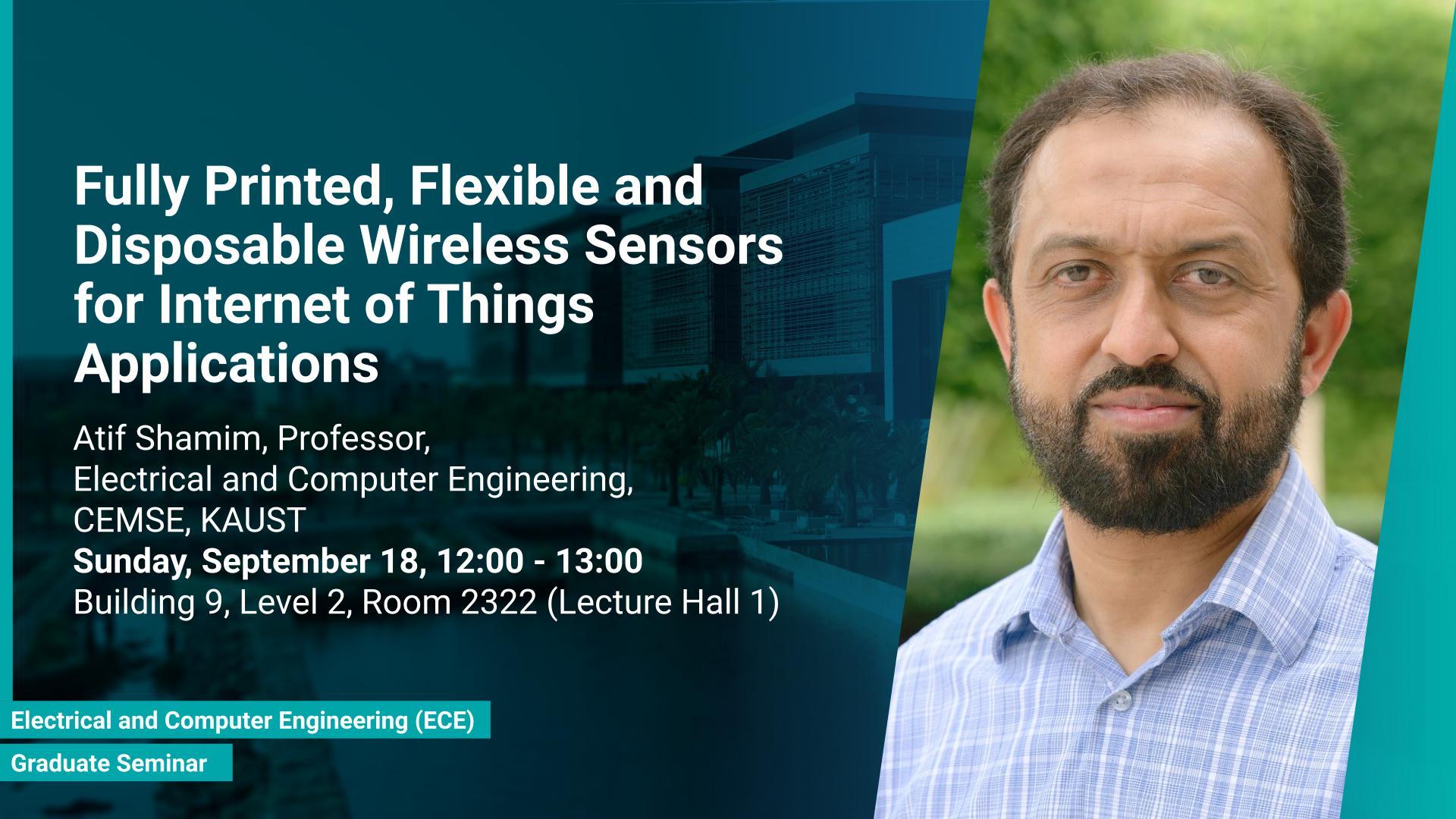 Atif Shamim
With the advent of wearable devices and internet of things (IoT), there is a new focus on sensing systems which can be bent so that they can be worn or mounted on non-planar objects. 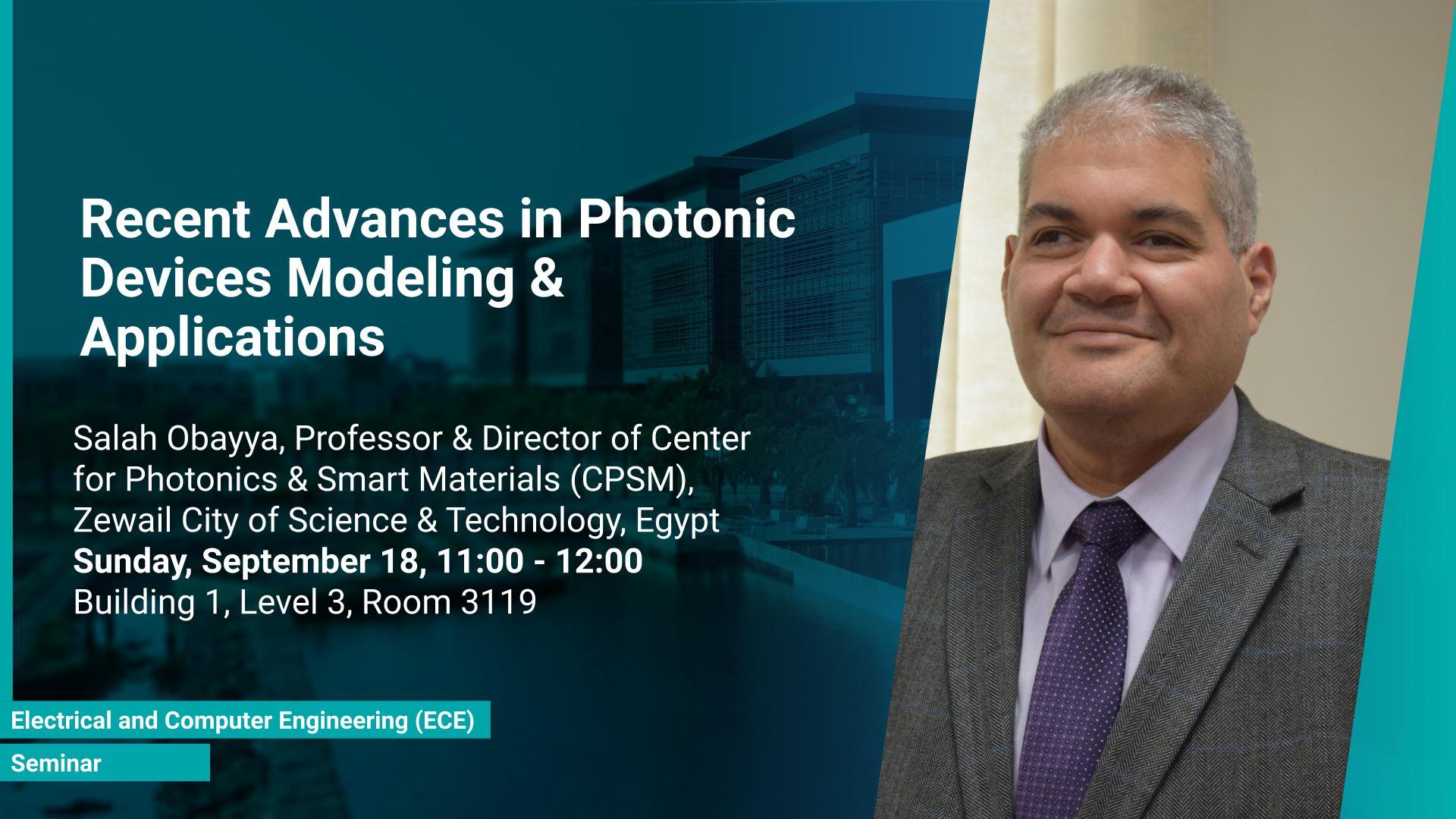 Mohamed-Slim Alouini
Dr. Obayya will present the most recent research results achieved at the Center for Photonics and Smart Materials (CPSM), Zewail city, in connection with analysis, design and optimization of wide range of photonic devices with applications in optical communications, plasmonics, metamaterials, energy harvesters, optical biosensors, and many others. 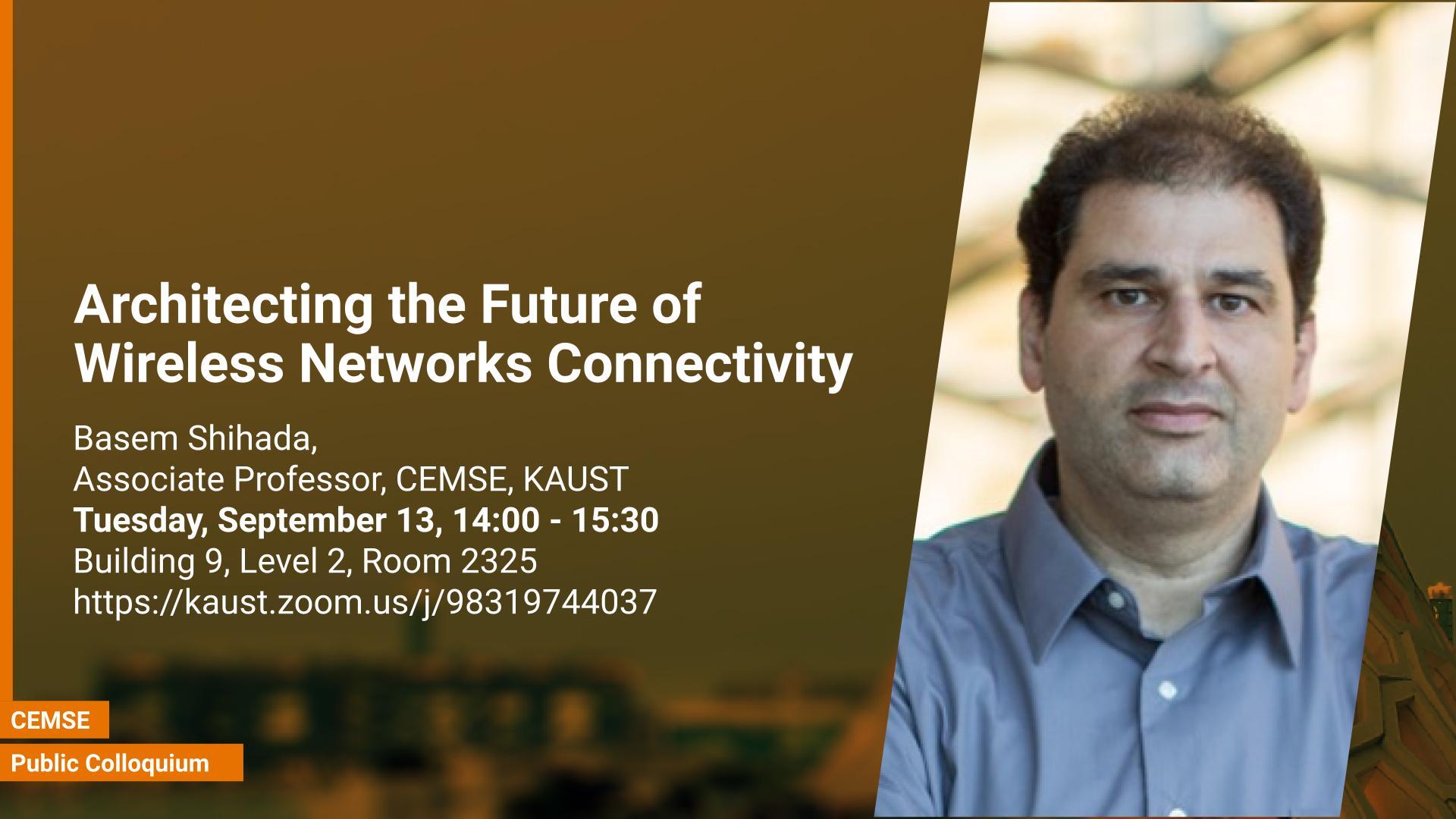 Basem Shihada
Associate Professor, Computer Science
Building 9, Level 2, Room 2325; https://kaust.zoom.us/j/98319744037
In this talk, I will start by providing our vision for next-generation networks. Throughout the talk, I will highlight several challenges in existing communication technologies that could have the potential of shaping new research and deployment directions of future wireless networks, including, (i) review our recent advances in non-terrestrial networks, which includes both UAVs and satellite (ii) show satellite systems are essential for today’s traffic-intensive applications while maintaining an accepted end-to-end latency for delay-sensitive applications and (iii) show how we integrated both existing Wi-Fi technology with optics to extend the Internet as we use it today to the underwater environments via Aqua-fi. 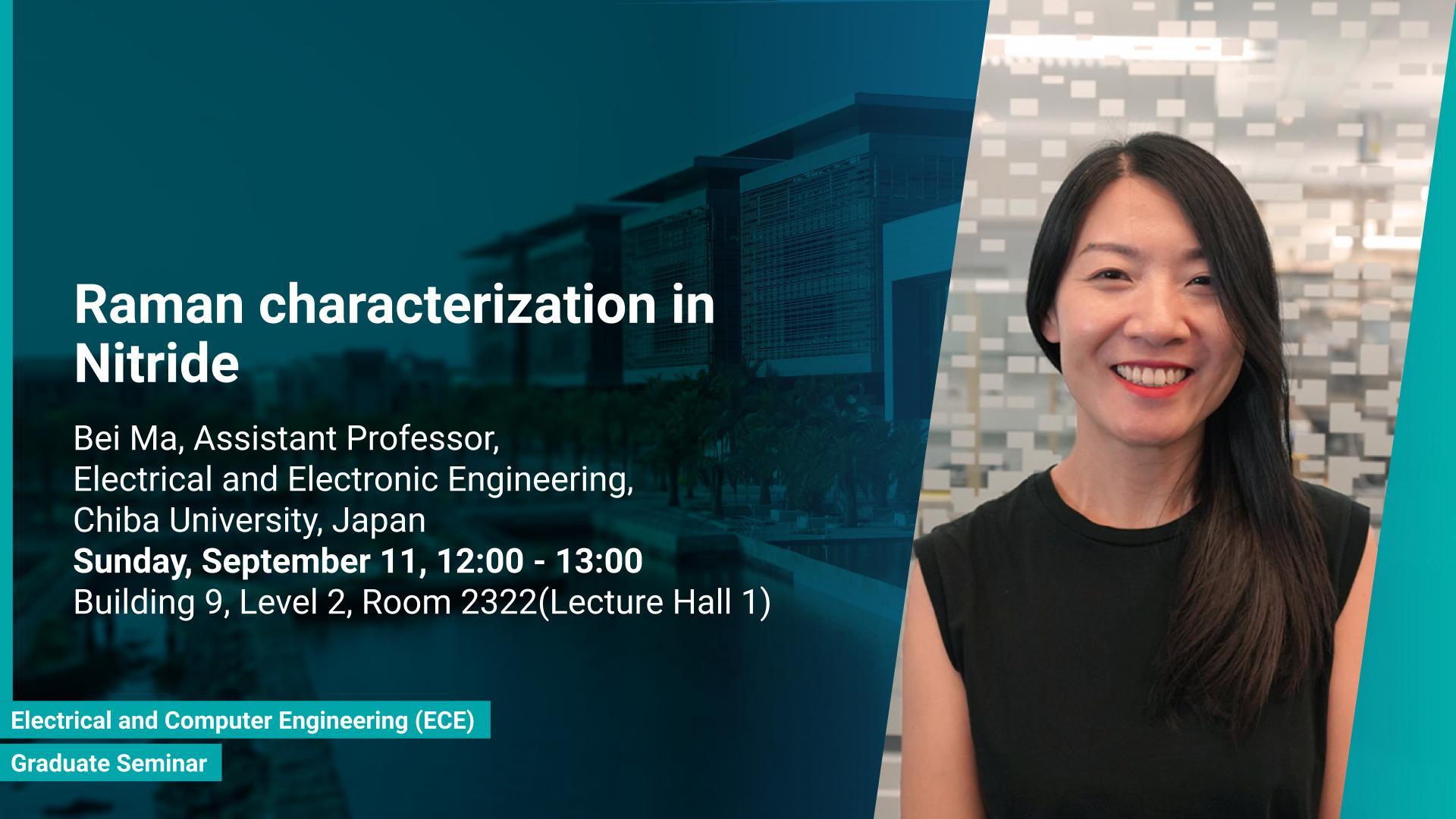 Kazuhiro Ohkawa
Raman spectroscopy has been used extensively to characterize the strain, defect density, and doping levels in semiconductors. We will introduce Raman spectroscopy in Nitride materials to estimate the crystal quality, and carrier concentration, which is determined by vibration modes.

Resilience is the Cybersecurity of the XXI century, and here's why!

Paulo Esteves-Veríssimo
In a nutshell, Resilient Computing is a new paradigm based on modelling, architecting and designing computer systems so that: they have built-in baseline defences; such defences cope with virtually any quality of threat, be it accidental faults, design errors, cyber-attacks, or unexpected operating conditions; provide incremental protection of, and automatically adapt to, a dynamic range of threat severity; provide sustainable operation.

Xiaohang Li
The Compound Semiconductor Weekend will focus on some of the most important research areas on the beautiful KAUST campus by the Red Sea. It features 18 invited and contributed oral talks and a poster competition. Semiconductor technology is a major foundation of the third and fourth Industrial Revolutions as well as the modern society. While silicon remains as the widest-employed semiconductor, compound semiconductors have emerged from lab research to becoming the second most widely used within a short period of time. This is because compound semiconductors could possess multiple superior key properties simultaneously. They include high speed, high power, and efficient light emission and absorption, as well as that they can be produced in large scale at low cost and are highly robust. As a result, they have become cornerstones of many crucial technologies including lighting, display, communication, space exploration, and electric vehicles. While semiconductor researchers are plowing deeper for those technologies, compound semiconductors attract increasing attention for future computing, memory, and quantum information science as the pursuit of Moore’s Law has slowed down dramatically when the size of silicon transistors is approaching the physical limit of a few atoms.

Shehab Ahmed
The remainder of the talk will focus on an ongoing effort to assess a city’s ecological impact through city scale digital twins. 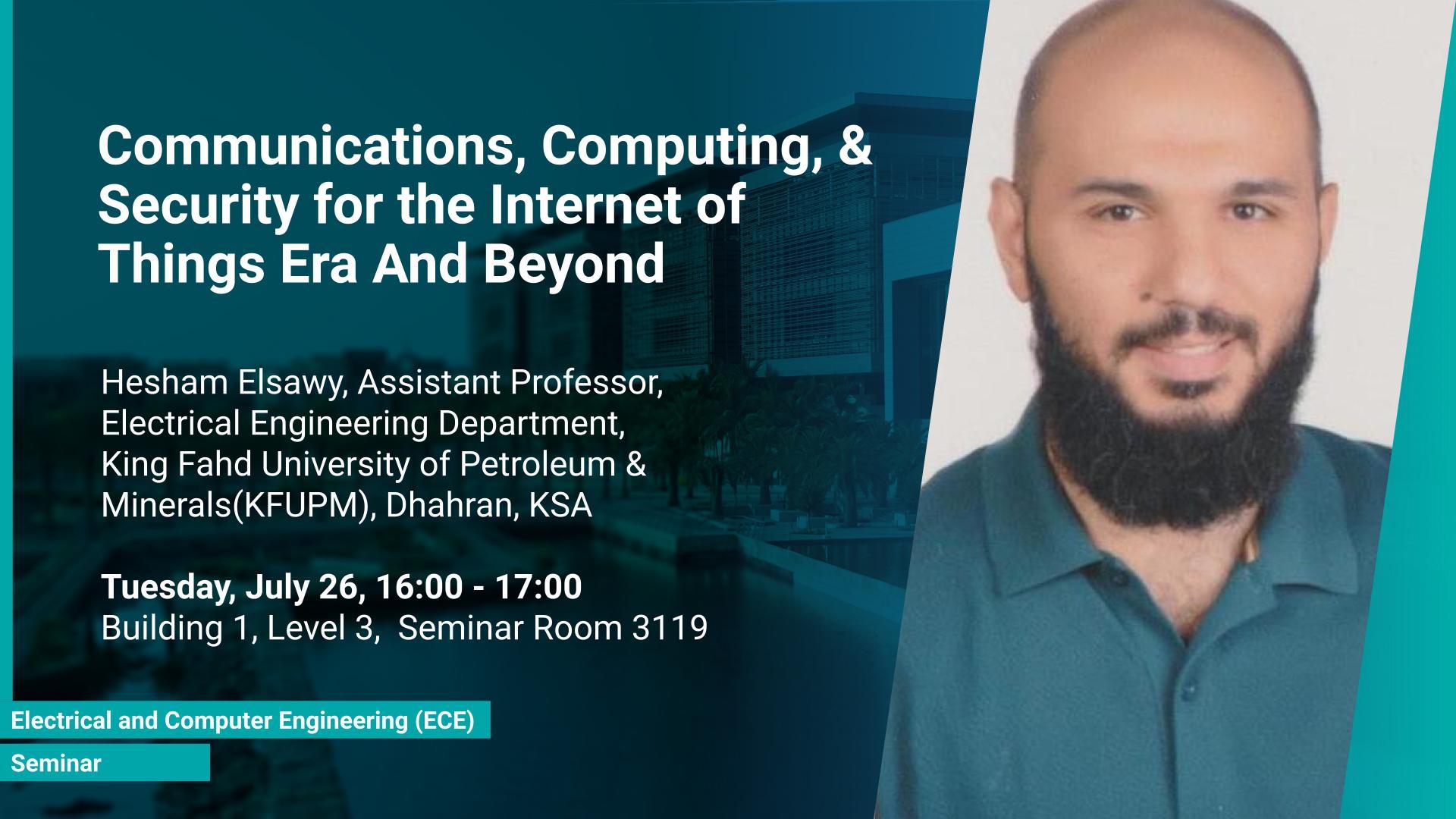 Communications, Computing, and Security for the Internet of Things Era and Beyond

Mohamed-Slim Alouini
This talk will first discuss the communications, computation, and security challenges for the IoT era and motivate a systematic methodology to address them.  The talk will then overview some relevant problems and their potential solutions. Future research direction will also be highlighted. 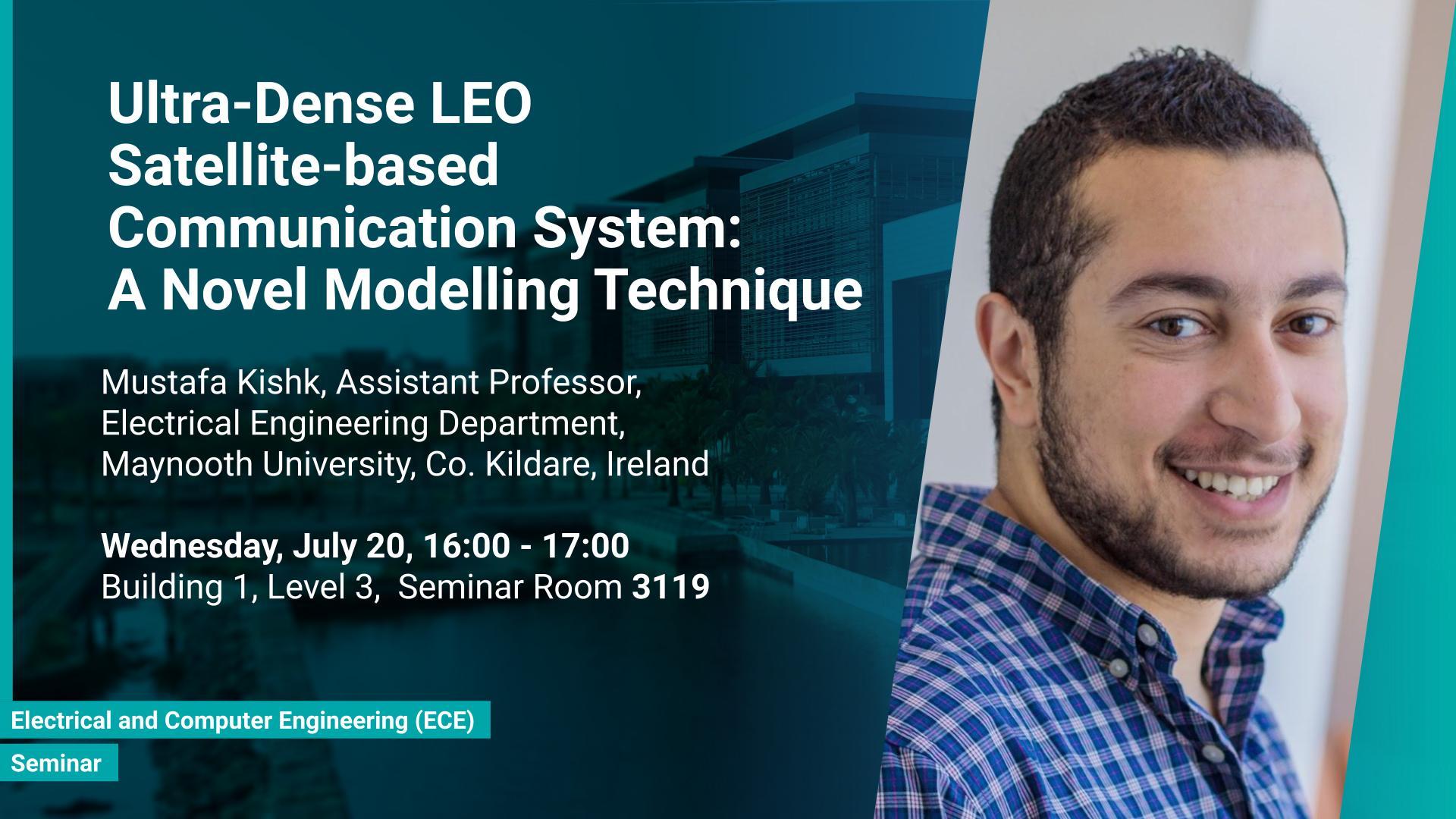 Mohamed-Slim Alouini
In this talk, we discuss a recently proposed mathematical framework that enables tractable analysis of LEO satellite-enabled communication systems while capturing the influence of satellites’ numbers and altitudes as well as the spatial distribution of earth stations. Firstly, we describe how the stochastic geometry-based framework is modeled and discuss its accuracy. Next, we provide a detailed example of where this framework can be used for coverage analysis. Furthermore, we discuss how this framework can be used to study routing and end-to-end latency analysis in such networks. Realistic values from existing constellations, such as OneWeb and Starlink, are further used as case studies in this talk. 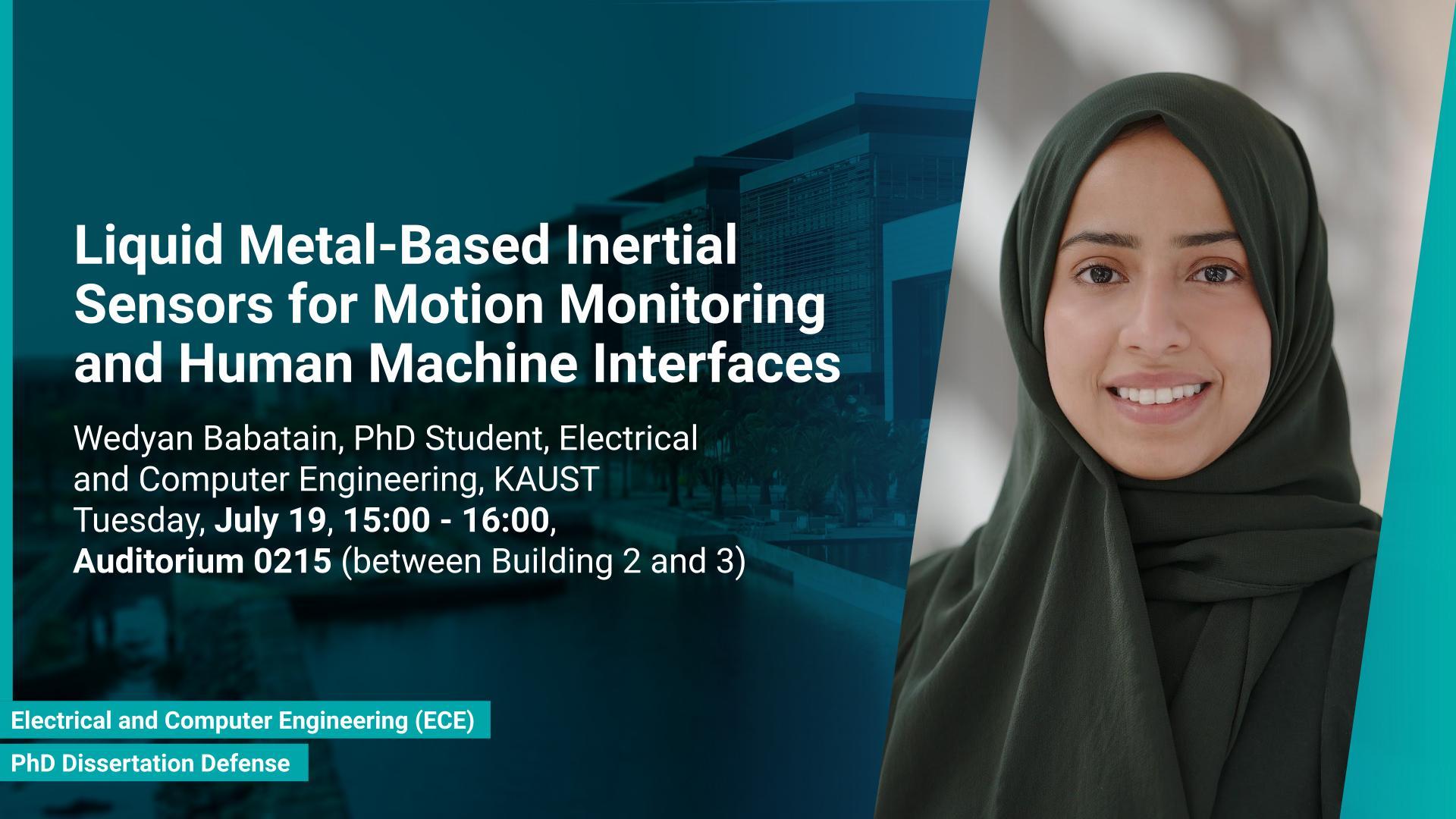 Wedyan Babatain
In this dissertation, the development of novel practical resistive and capacitive-type inertial sensors using liquid metal as a functional proof mass material is presented. Utilizing the unique electromechanical properties of liquid metal, the novel inertial sensor design confines a graphene-coated liquid metal droplet inside tubular and 3D architectures, enabling motion sensing in single and multiple directions. Combining the graphene-coated liquid metal droplet with printed sensing elements offers a robust fatigue-free alternative material for rigid, proof mass-based accelerometers. Resistive and capacitive sensing mechanisms were both developed, characterized, and evaluated. Emerging rapid fabrication technologies such as direct laser writing and 3D printing were mainly adopted, offering a scalable fabrication strategy independent of advanced microfabrication facilities. The developed inertial sensor was integrated with a programmable system on a chip (PSoC) to function as a stand-alone system and demonstrate its application for real-time- monitoring of human health/ physical activity and for soft human-machine interfaces. The developed inertial sensor architecture and materials in this work offer a new paradigm for manufacturing these widely used sensors that have the potential to complement the performance of their silicon counterparts and extend their applications. 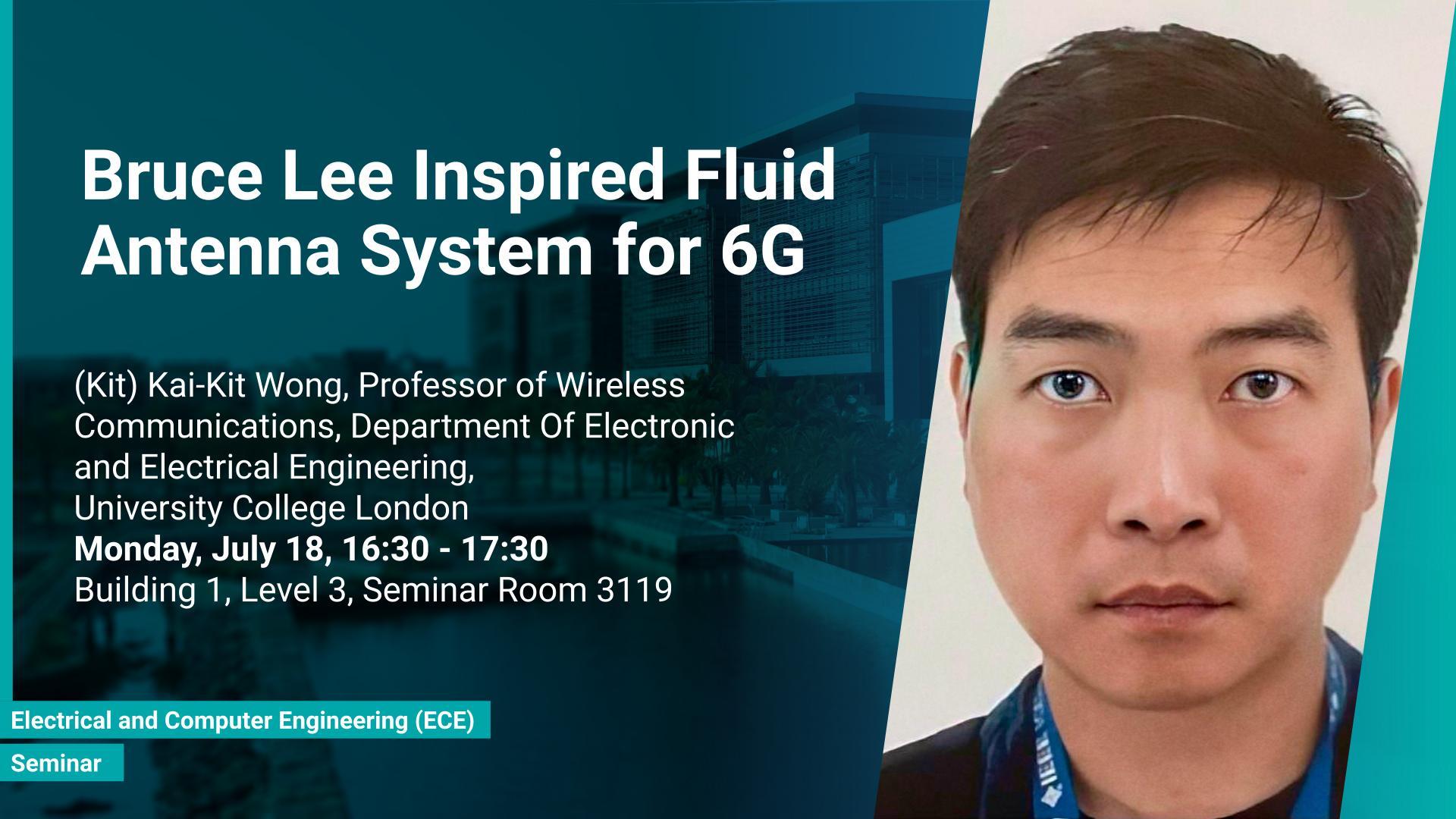 Mohamed-Slim Alouini
In this talk, I will speak on a novel antenna technology, referred to as fluid antenna, that adopts a software-controlled, position-flexible antenna to operate on the best signal envelope within a given space. This talk presents some early results on fluid antenna systems, which shows its potential for improving wireless communication performance. 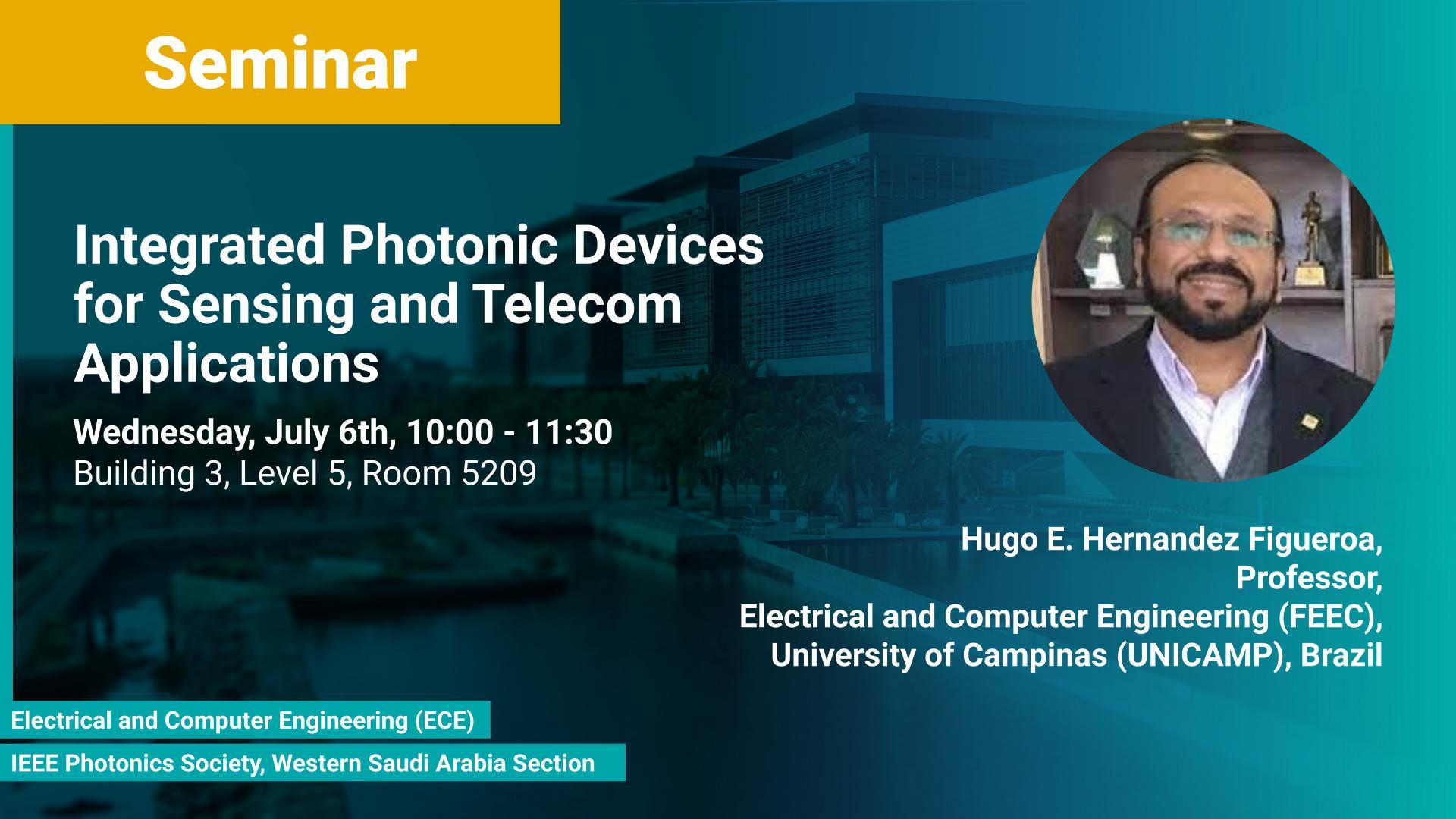 Boon Ooi
This talk will be focused on Integrated Photonics technology, which demands strong and robust confinement of light in order to attain the maximum possible integration of photonics devices on a single chip. Keeping this in mind, three applications based on LEMAC’s recent developments will be presented in this talk. 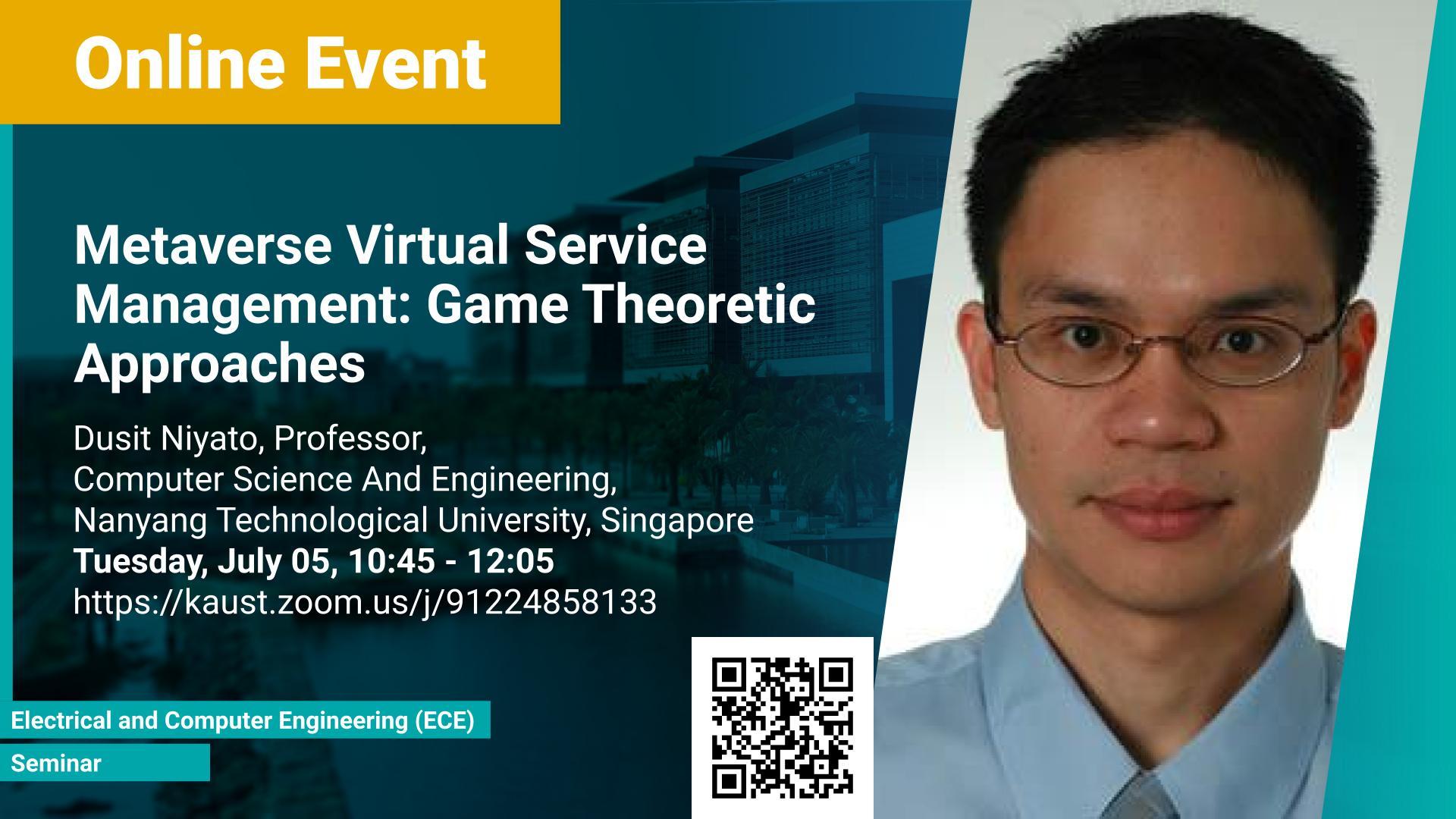 Mohamed-Slim Alouini
Metaverse is the next-generation Internet after the web and the mobile network revolutions, in which humans (acting as digital avatars) can interact with other people and software applications in a three-dimensional (3D) virtual world. In this presentation, we first briefly introduce major concepts of Metaverse and the virtual service management. Then, we discuss applications of game theory in the virtual service management. 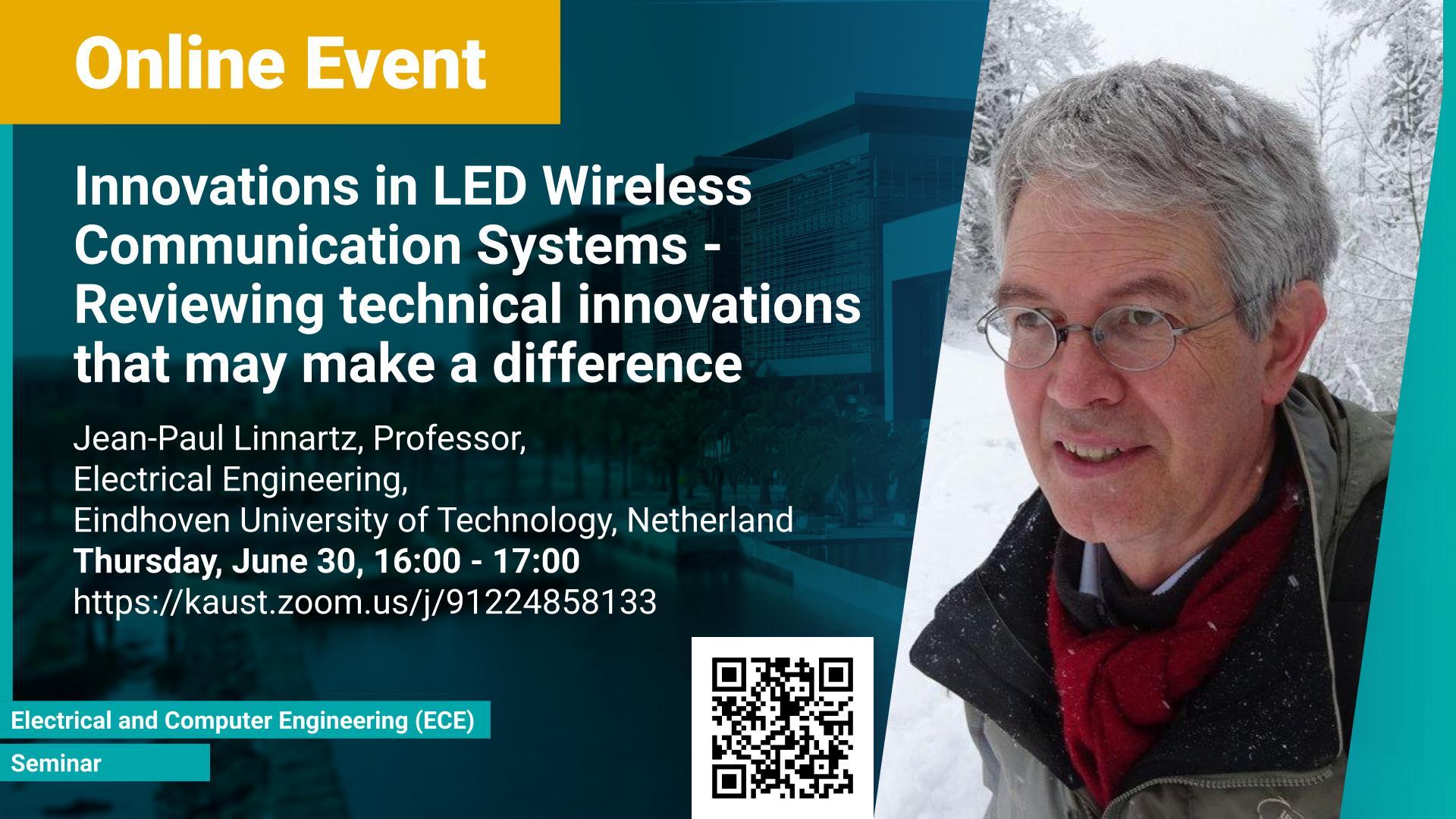 Mohamed-Slim Alouini
With the transition from traditional to LED light sources, the lighting industry has changed completely. Lighting systems have become intelligent and connected. 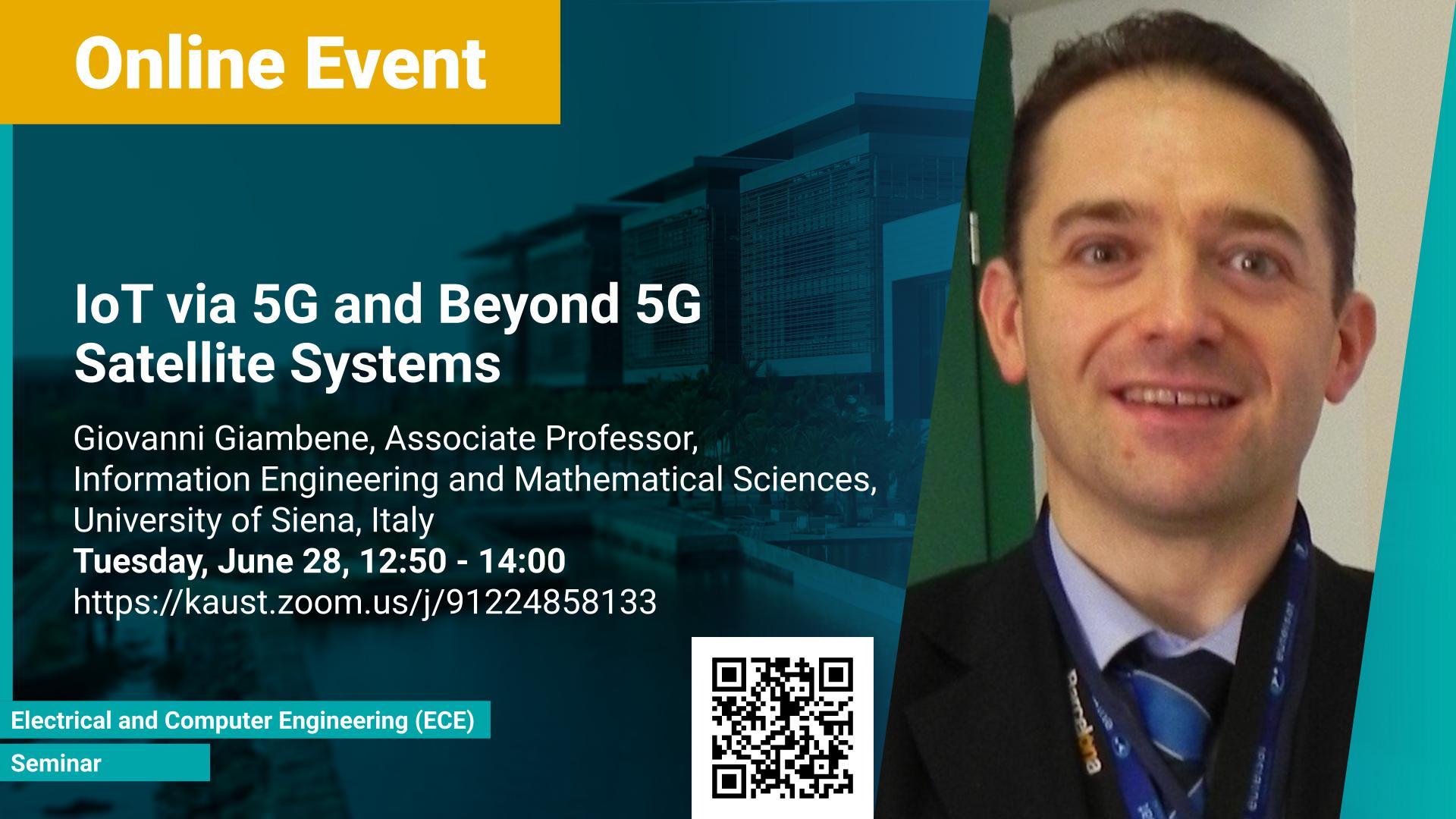 IoT via 5G and Beyond 5G Satellite Systems

Mohamed-Slim Alouini
One of the key drivers for next-generation mobile communications is the support of the Internet of Things (IoT), with billions of objects connected to the Internet and very low latency. The 5G technology will support the realization of smart cities, smart environments, and big data applications. 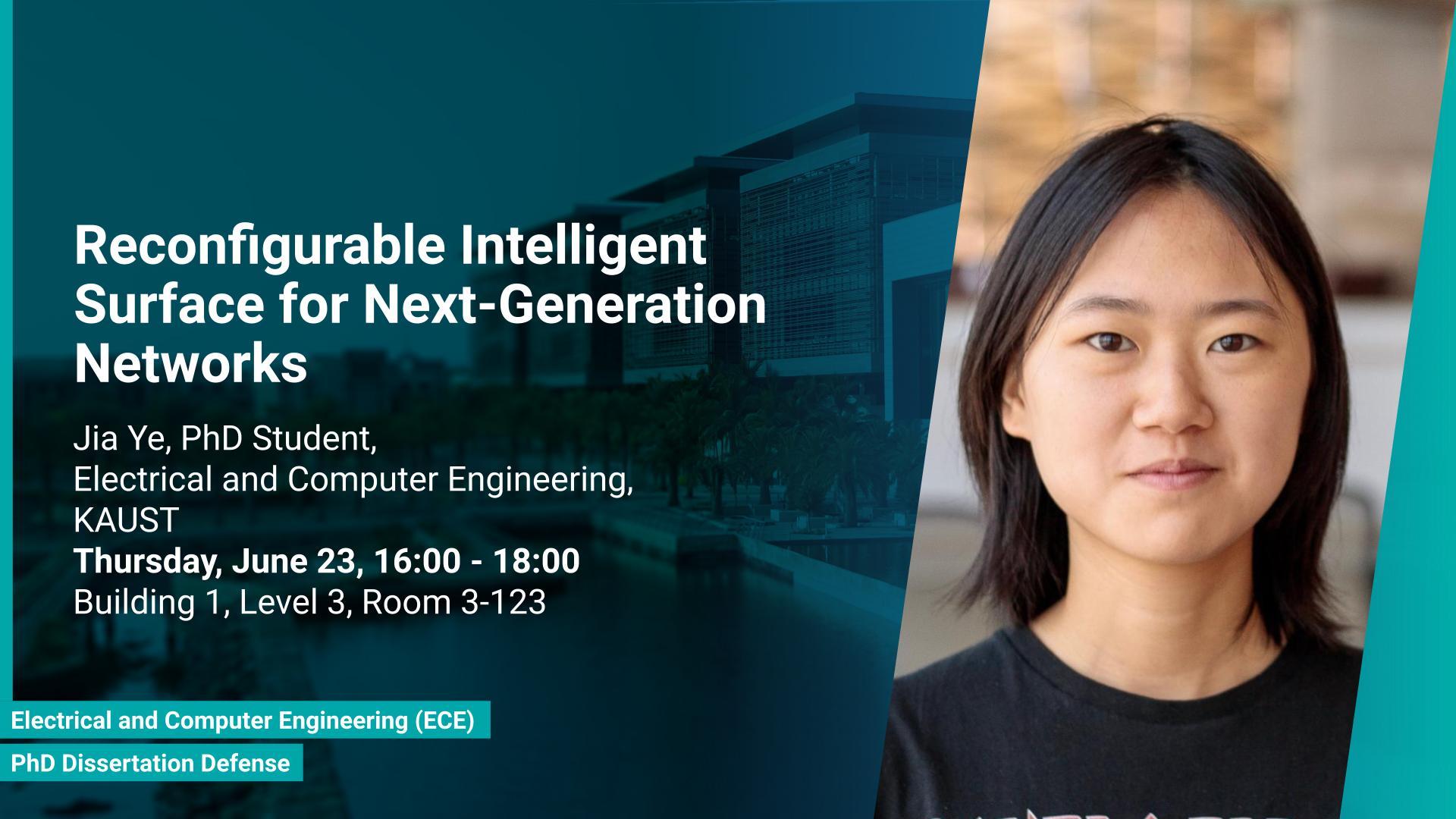 Mohamed-Slim Alouini
Reconfigurable intelligent surfaces (RISs) are now considered among the key enabling technologies for 6G systems. Empowered by the recent advances in meta-material, RISs are equipped with a large number of low-cost passive elements that allow for the modification of the radio waves in that they reflect, refract, and scatter radio signals in a controllable fashion to counteract the destructive effect of multipath fading. These features can be leveraged to transform the propagation environment into a smart space that can be programmable for the benefit of the communication application. Throughout this proposal, we study RIS-assisted systems from different perspectives, including performance analysis, system optimization, and channel estimation, to analyze and enhance the operation of such systems in different setups. Some possible future research directions to be considered are also highlighted. 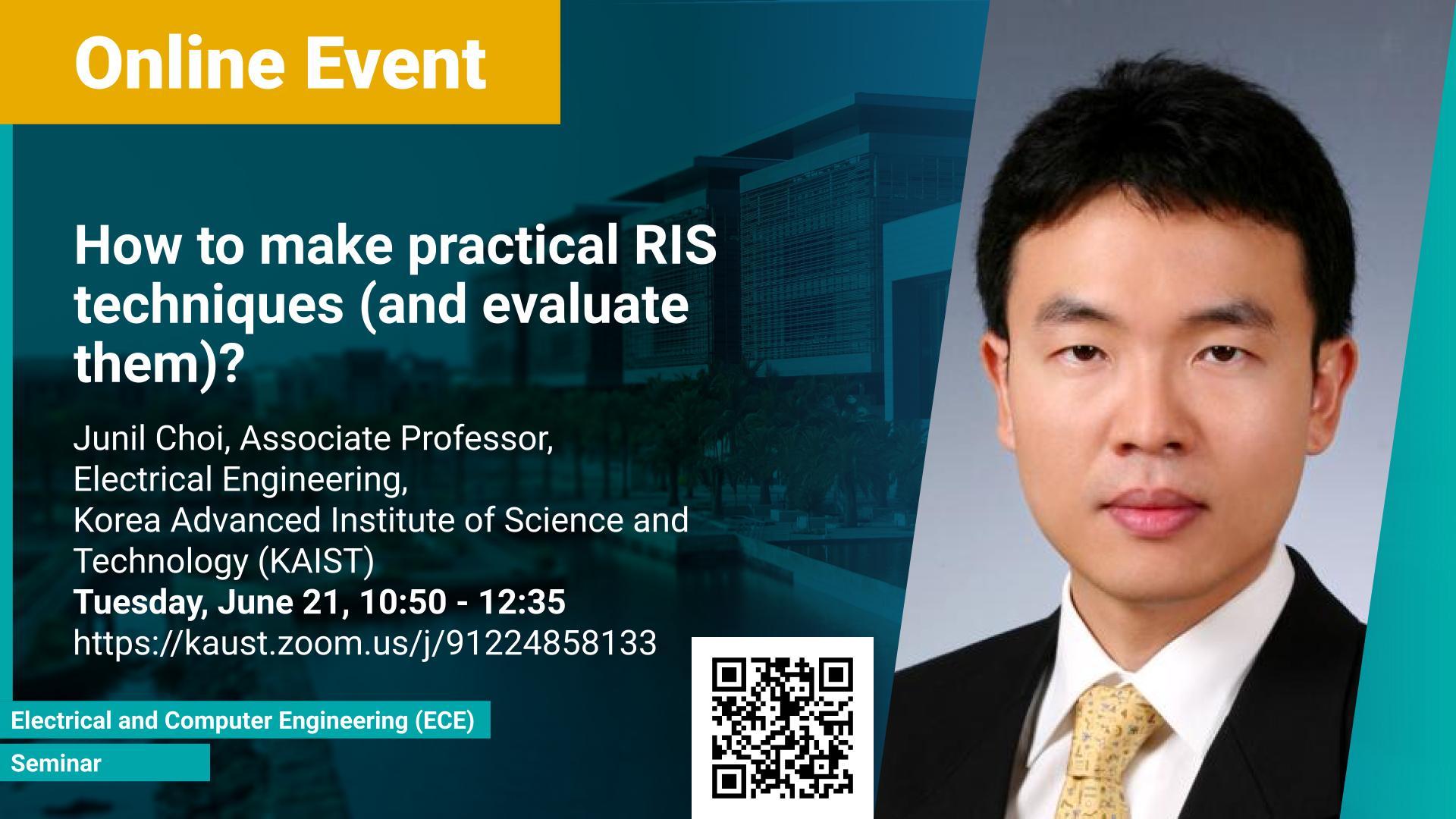 How to make practical RIS techniques (and evaluate them)?

Mohamed-Slim Alouini
In this talk, I will first explain low-complexity, non-iterative, and near-optimal RIS (eflecting intelligent surface) joint active and passive beamformer designs for both narrowband and wideband assuming full channel information. Then, I will explain several practical channel estimation techniques for RIS systems. Lastly, I will introduce WiThRay, a versatile 3D wireless communication simulator based on ray-tracing developed by our lab, that can be used to evaluate different RIS techniques for various environments.