Recent advancements in evolutionary biology are greatly impacted by the production of massive "omics" data sets, such as genomes, transcriptomes, proteomes and metabolomics that are now available for evolutionary studies. The sheer size and complexity of this data requires the Big Data paradigm and approach essential in its analysis. Additionally, comparative studies are crucial for evolutionary studies, which further leads to the need to develop state-of-the-art bioinformatics technologies and can underpin both research and technology.

KAUST researchers and their international peers came together from December 4 to 6, 2017, to discuss how these topics impact evolutionary biology at the recent Research Conference on Big Data Analyses in Evolutionary Biology. The conference, which was organized by the KAUST Computational Bioscience Research Center (CBRC), provided a platform for an active exchange of ideas on the advancement of research in big data analyses and bioinformatics focused on evolutionary biology.

Throughout the three-day event, presenters and attendees discussed what computer science can bring to the field of biology in general and evolutionary biology in particular, and also what lessons learned from these fields offer to the computational sciences.

The present and the past

In his welcome remarks, Mootaz Elnozahy, dean of the University's Division of Computer, Electrical and Mathematical Science and Engineering (CEMSE), welcomed international guests to the University and highlighted the strides the University is continuing to make as a global research institution. 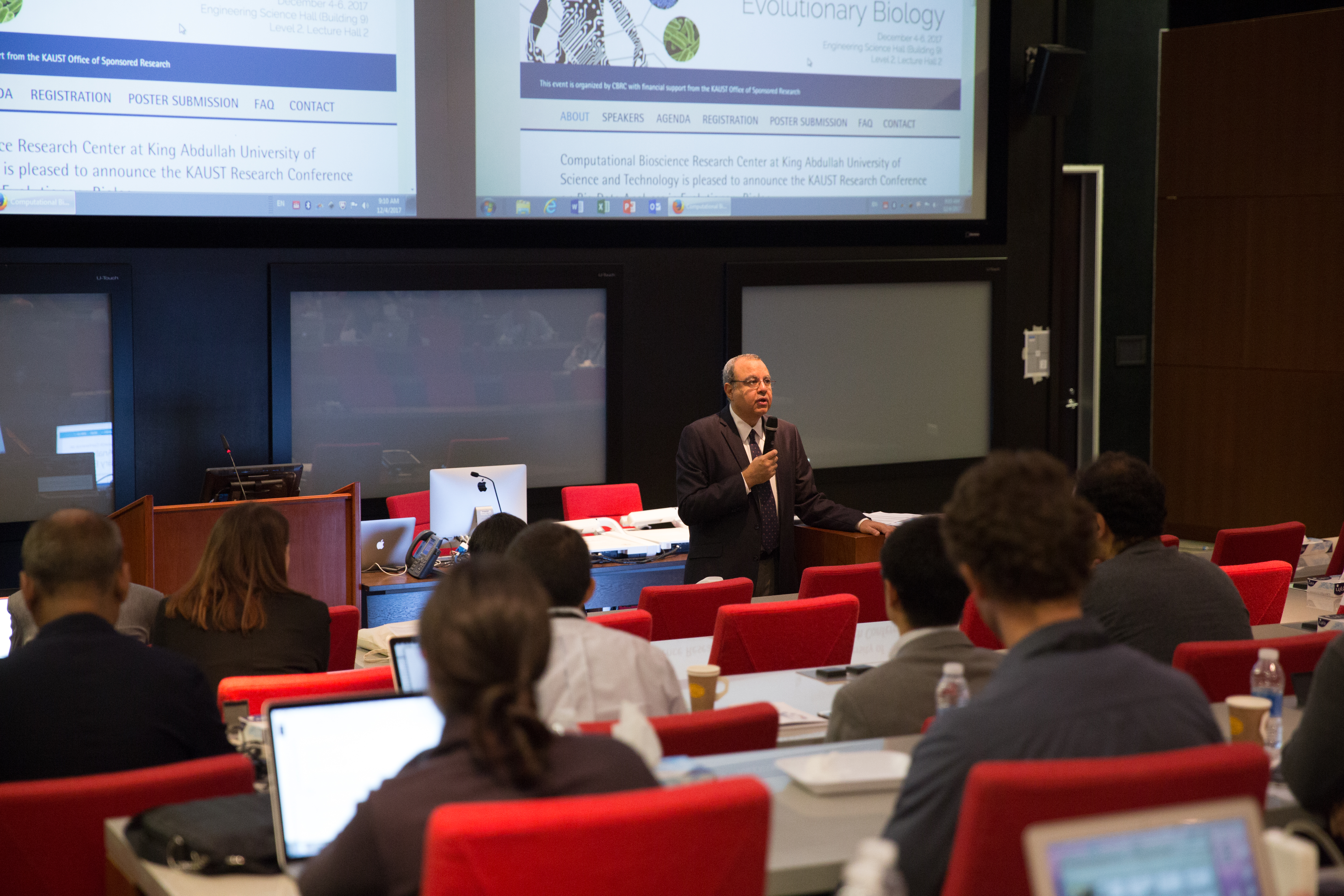 Mootaz Elnozahy, dean of the University’s Division of Computer, Electrical and Mathematical Sciences and Engineering (CEMSE), welcomed international guests to the University and the Research Conference on Big Data Analyses in Evolutionary Biology. Photo by Lilit Hovhannisyan.

"This year, the University has been blessed with five career awards for our faculty spread out among the divisions. It is a testament to the quality of faculty we have here at KAUST. It is a very exciting time here at KAUST. We continue to evolve as a young university and we are a model community that focuses on science," Elnozahy said.
"Change is what we do in the field. You must always evolve to keep up with the latest technologies. This workshop is a great opportunity to create or extend existing collaborations," he added. 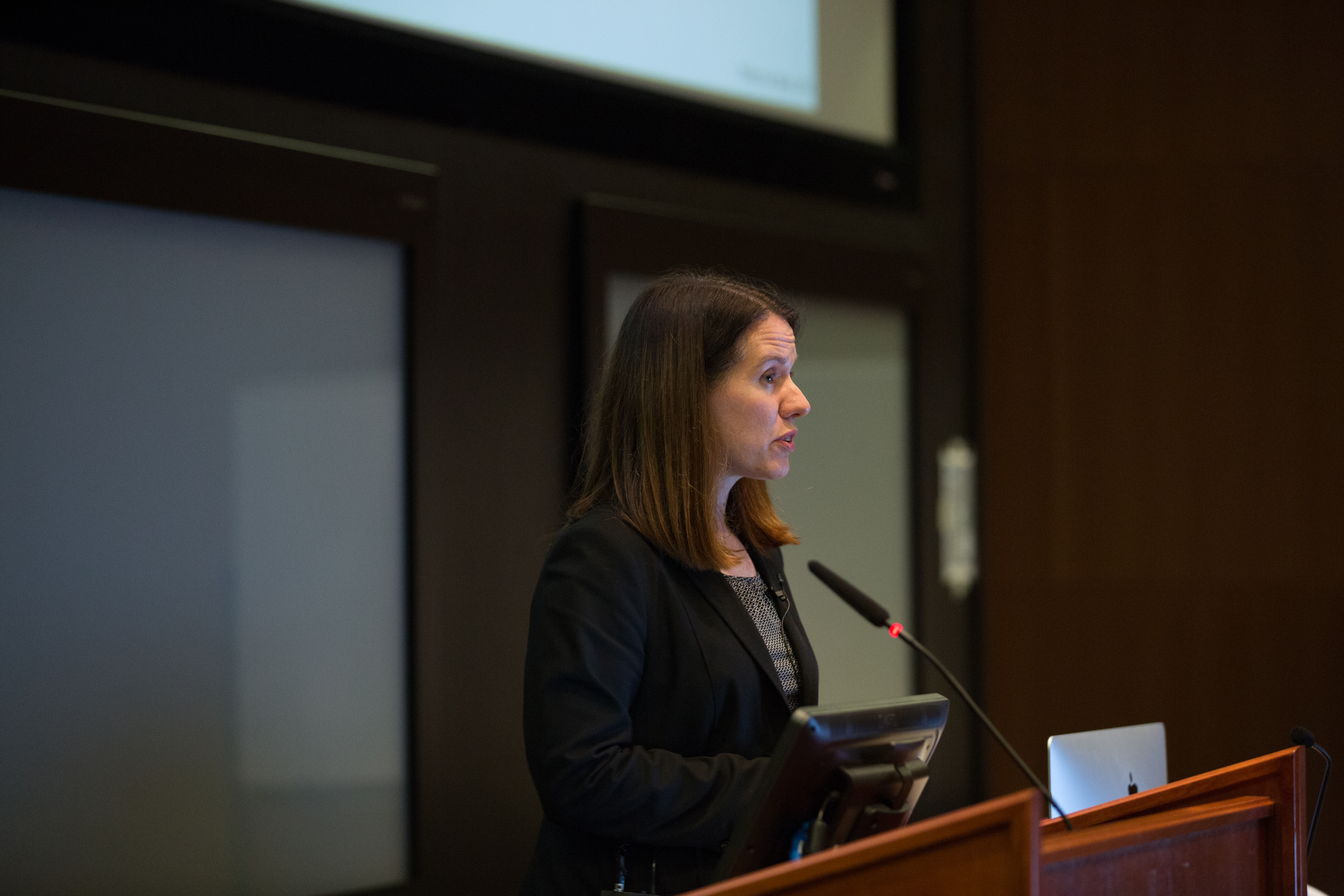 Janet Kelso, head of the Bioinformatics research group leader at the Max-Planck Institute for Evolutionary Anthropology, speaks during the Research Conference on Big Data Analyses in Evolutionary Biology. Photo by Lilit Hovhannisyan.

Janet Kelso, head of the Bioinformatics research group at the Max-Planck Institute for Evolutionary Anthropology, took attendees through recent findings of ancient DNA and how the genomes of archaic and early modern humans offer a unique window into their histories.

Kelso discussed her team's recent work on identifying Neanderthal haplotypes that are likely of archaic origin and determined the likely functional consequences of these haplotypes using public genome, gene expression and phenotype datasets.

"You can infer a lot from bones, but not everything. Sequencing the Neanderthal genome was pretty much impossible up until the mid-00s, but sequencing technologies have advanced at a rapid rate. We are starting to see a genomic sequence of when Neanderthals may have interacted with early modern humans," she said.

Sudhir Kumar, the Laura H. Carnell professor and director of the Institute for Genomics and Evolutionary Medicine at Temple University, discussed how nature has been the greatest experimenter on Earth for millennia. Kumar presented highlights of his team's recent research in phylomedicine of Mendelian, cancer and complex diseases. Kumar highlighted how new mutations continuously arise in our genomes and their fate is determined by the action of purifying selection, genetic drift and positive selection.

"Mutations have been happening since the dawn of time. When we look at past mutations in species, they have been fixed—they have been inherited. Somatic mutation is a really interesting field of study. Once we understand this past information on mutations, we should be able to use it for future information," Kumar noted.

"Mutations over timescales are useful for inferring the history of species and genes as well as building better predictive models even without training data," he added.

"Phylogenomics is retrospective, while phylomedicine is prospective (looking into the future)—that's how phylogenetics can, in principle, inform phylomedicine. Using phylomedicine, we can forecast whether an allele is of high or low evolutionary probability just based on alignment rather than species polymorphic data," Kumar said. 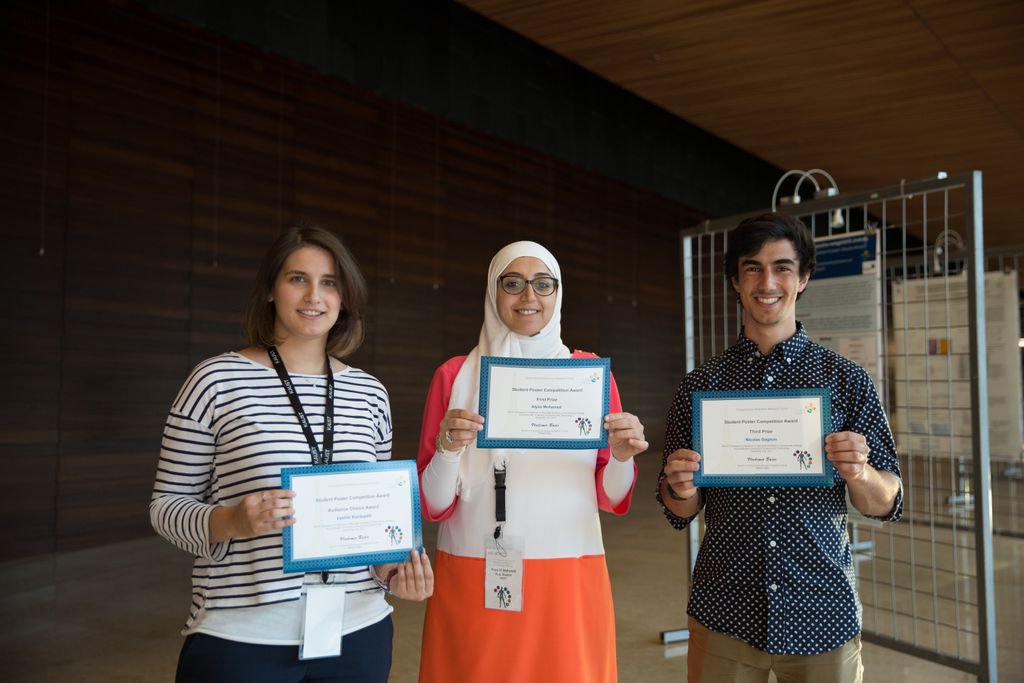 The first day proceedings concluded with a poster session, which focused on the conference's relevant areas and gave an opportunity for students to present their research.

Professor Shozo Yokoyama, the Asa G. Candler endowed chair in biology in the Department of Biology at Emory University, talked through the adaptive evolution of vertebrate vision.

Yokoyama highlighted the striking array of phenotypes exhibited by contemporary animals, which are assumed to have evolved through the accumulation of a series of selectively advantageous mutations.

"In the lab, we express the cell culture—we are interested in how animals shift and adapt to an environment on a molecular level—we don't do statistics much. We can see whether a subject is adaptive or not to its environment. Our ancestors wanted to change slowly; they did not want a drastic change," Yokoyama said.

"In adaptive evolution, you have many paths. Vertebrate ancestors appeared in a uniform, shallow water environment, but modern species flourish in highly variable niches. A lot of forces come together to make adaptive evolution happen," he added.

The rainforests of the ocean

Christian Voolstra, associate director of the KAUST Red Sea Research Center, expanded on what he called the "Metaorganism Imperative." Voolstra's talk focused on the recent efforts to investigate metaorganism function and evolution and how the appreciation of host-microbe interactions provides new insight into host biology in light of the microbiome.

"Coral reefs are the 'rainforests of the ocean,' and coral is the foundation of reef ecosystems and metaorganisms. Coral is a particular form of animal that is reliant on microbes. There is now a multitude of studies that support the notion that a host-specific microbiome associated with multicellular organisms. However, they are globally threatened by both local and international influences. Coral bleaching is becoming more severe as time progresses and coral reefs—the environment of coral reefs—is completely changing as we know it," Voolstra noted.

"Corals are long-lived organisms and have long generation times, and they can be genetically adapted to their thermal environment. Our studies have shown that geography is not a confining factor," he added.

"Our goal is to disassemble the metaorganism structure to study its structure and function using the Aiptasia model system. Organisms do not live in isolation and to survive, microorganisms have to evolve. We are all meta-organisms—two-thirds of our genes have an ortholog or an ancestral gene from bacteria," Voolstra said.

The morning session on December 6 focused on young talent. Students Yi Mei Ng, Alyaa Mohamed, Ghofran Othoum, Yu Li and Sarah Alghamdi had 15 minutes each to discuss and present their research and findings. 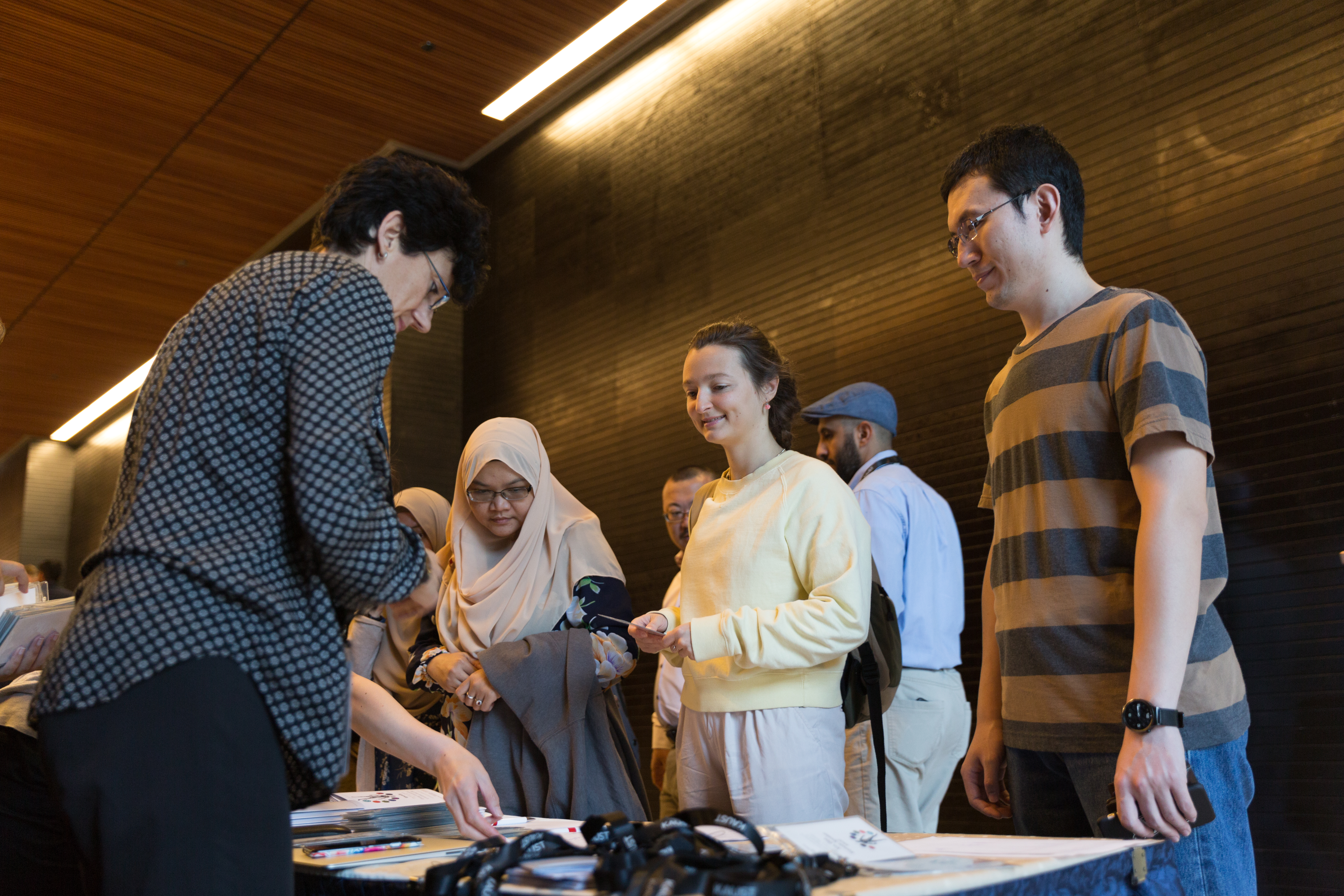 Saudi native Fowzan Alkuraya discussed large-scale medical genomics in the Kingdom and the characteristic signature of autozygosity, which presents numerous opportunities for the annotation of the human genome
"Our field has turned into a data-driven science. Predictions say that people will be genome sequenced for free in the future. Sequencing is not the problem. Variant interpretation is the new bottleneck. It's a case of how to make sense of all this new data," Alkuraya noted.

"We are expanding the potential for AI—for AI to help with our research. We do need to collect more data so AI can become smarter. Who are we to say that biology is benign?" he added. 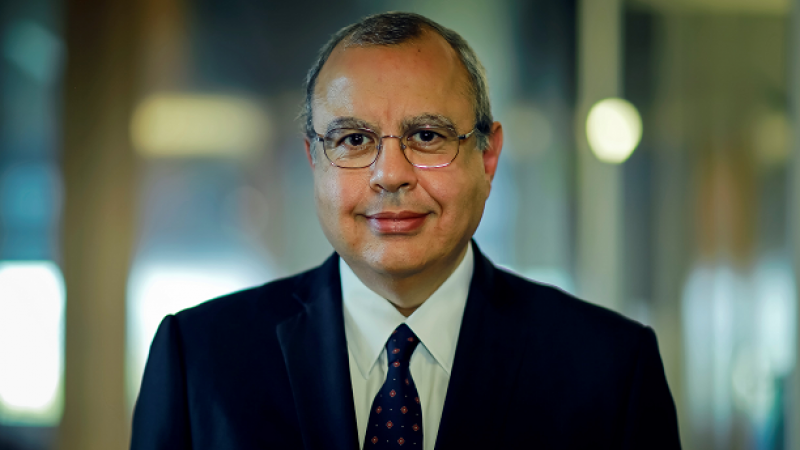 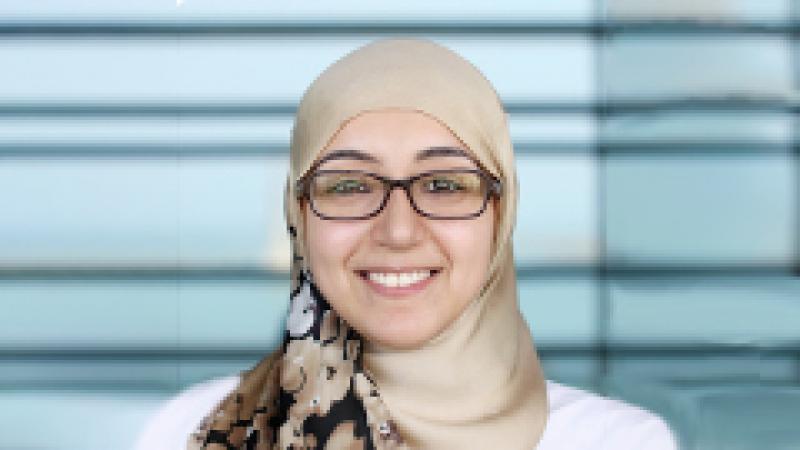 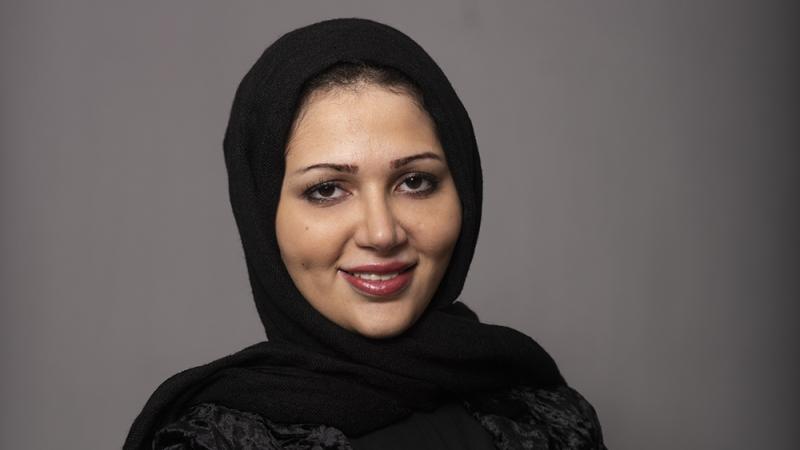 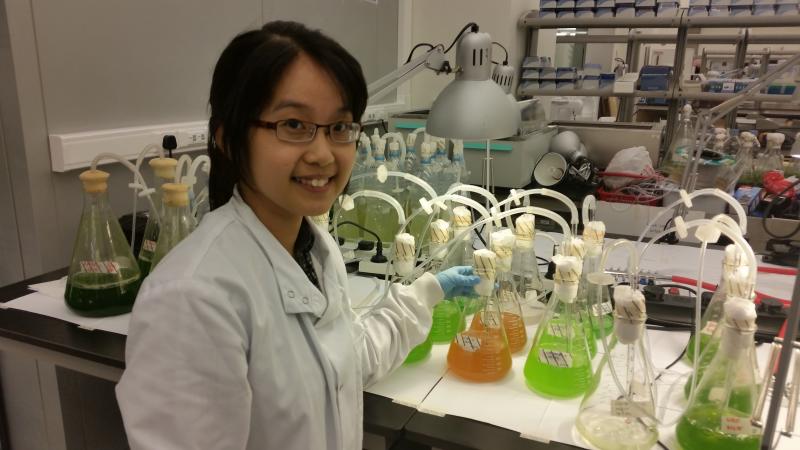 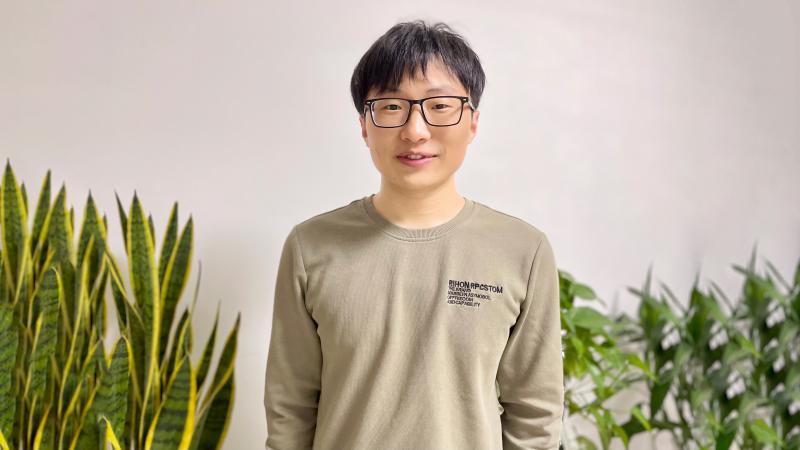 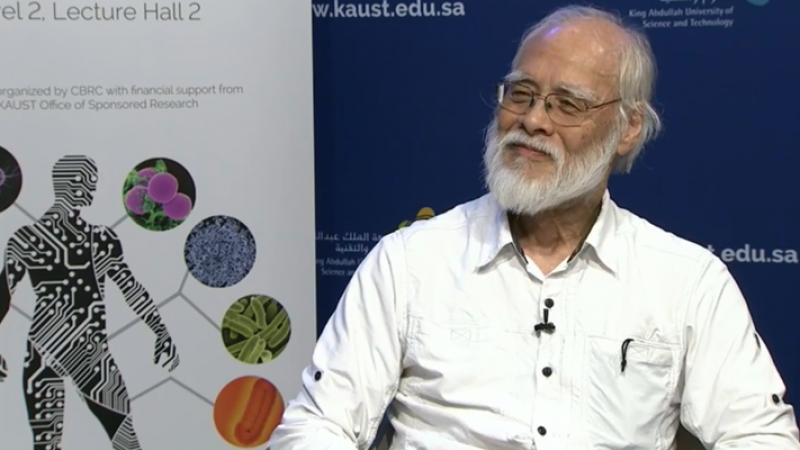 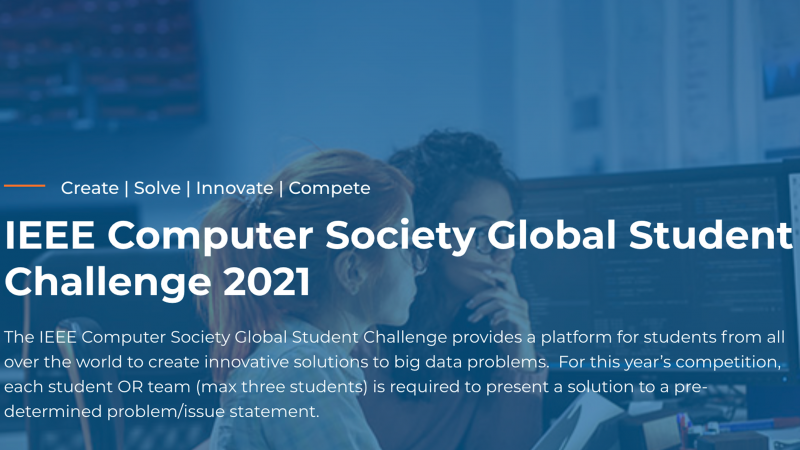 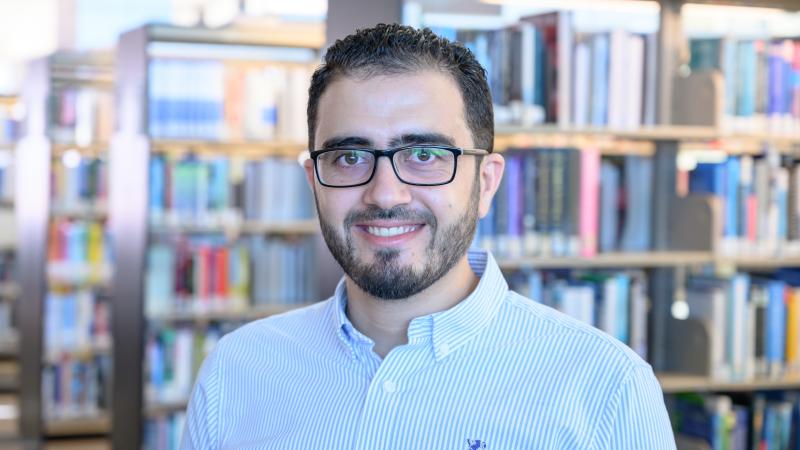